If you’re a fan of the infamous duo Bonnie and Clyde, then you may think that you know everything there is to know about this pair of criminal love birds.

You’ve probably heard about Clyde Barrow’s unusual gait, almost like a limp. Some people have speculated that he did so to appear more menacing, others that Clyde’s walk was to make himself more memorable.

The surprising reason behind Barrow’s unusual gait is that he was missing two of his toes!

Was he born that way?

Let’s talk about the facts behind Clyde Barrow’s missing toes.

When Did Clyde Lose His Toes?

Clyde lost his toes in 1932 for a very surprising reason—he cut them (or had someone cut them!) It’s hard to imagine how someone could do such a thing, but let’s dig deeper why he did it.

Clyde Barrow was born in Telico, Texas in 1909, with all of his fingers and toes intact.

His family was very poor, but they were also close-knit. Clyde’s older brother Buck introduced him to a life of crime very early on.

In high school, friends remembered Clyde as a quiet boy who loved music. He played the saxophone and guitar.

When Bonnie Parker met Clyde Barrow in January 1930, the latter already had a significant criminal record. In fact, just a few weeks after their first meeting, he was arrested for car theft.

By the time Clyde was 21, he was already serving time for theft and robbery. He was sentenced to one of the worst prisons in Texas, the brutal Eastham Prison Farm.

Bonnie smuggled in a gun so Clyde could escape, and he did, but he was quickly recaptured and sentenced to 14 years of hard labor.

Some speculate that Clyde was lazy and didn’t want to work the prison farm, but there is a deeper truth behind this story.

Clyde was being beaten and raped by another inmate, Big Ed Crowder.

One day, Clyde had had enough. He lay in wait in the shower for Big Ed and beat him to death with a metal pipe. Another inmate, who was already serving life in prison, told Clyde to get lost and that he would take the heat since they couldn’t do anything more to him.

It’s not known whether Clyde cut off his toes in an attempt to get moved to another location and away from Big Ed, or he cut them off afterward in a desperate attempt to be released.

Either way, Clyde Barrow entered the brutal Eastham prison farm with ten toes and left with only eight.

Did Clyde Cut Off His Toes Himself?

The story we are told is that Clyde asked another prisoner to “accidentally” cut off a couple of toes with an ax so he would be moved or paroled.

There is no mention of the other inmate’s name, but the location of Clyde’s missing toes leaves one to speculate that he did the job himself.

If someone is standing next to you, on either side, they could easily cut off your pinky and fourth toe.

That’s not what happened.

Clyde cut off his left big toe and the second toe next to it. This would be easily accomplished if Clyde had been holding an ax and was right-handed, which he was.

So while the story goes that another inmate did the dirty deed, it would appear that Clyde mutilated himself.

The Sad Part of the Story

What Clyde didn’t know was that his mother had been making the rounds at the courthouse on his behalf.

In the 1920s, bribery was extremely common. Whether Clyde’s mother Cumie bribed a judge or simply made an impassioned plea to the parole board is unknown.

What is known, however, is that a parole board decided to release Clyde after Cumie pleaded that she desperately needed her son at home to earn money as a mechanic and work in the family repair shop.

Clyde was released from prison just 6 days after he lost two of his toes to an ax!

What Else Did Clyde Lose in Prison? 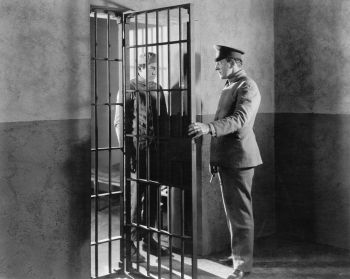 Young Clyde Barrow lost more than just his toes in prison. He lost his innocence and sweet demeanor.

Friends say that Clyde went into Eastham as nothing more than a dumb kid with a two-bit criminal record, but that he came out “like a rattlesnake.”

Clyde also gained something during his time in the slammer—a grudge and desire for revenge.

It is well-documented that Clyde frequently talked about getting together a gang, returning to Eastham, and killing every single guard.

We don’t know whether the guards singled out Clyde for abuse or Clyde got the same ugly treatment as everyone else (Think Shawshank Redemption), but his desire for revenge fueled his every move afterward.

How Did Clyde’s Missing Toes Affect Him?

Clyde was never able to walk properly again afterward. With a left foot that refused to function properly, Clyde was forced to drive barefoot or in socks.

Barrow’s driving was no doubt impaired when you consider that cars in the 1920s had manual transmissions, which required the left foot to operate the clutch.

No doubt this lack of footwear caused a huge problem to Barrow’s driving and even led to a terrible car crash that resulted in Parker’s leg getting damaged by car battery acid.

Barrow’s two missing toes helped the police positively identify him after the shootout that took his life.

Some people believe that Clyde Barrow’s loss of his toes was his own fault. Along those lines, Bonnie Parker’s injuries were also her own responsibility since she decided to keep company with Clyde Barrow.

Bonnie’s mother certainly blamed Clyde for what happened to her daughter, which was her prime reason for not allowing them to be buried together.

“Clyde had my girl for two years, and look what he did to her”, Bonnie’s mother said at her funeral.

The duo lived on the run for slightly more than 2 years, but they did pay a big price for their life of crime. 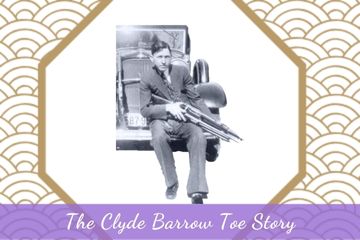 The Clyde Barrow Toe Story - Fact or Fiction?
You may think you know all about Bonnie and Clyde, but who knew Clyde was missing two toes? Did he cut them off himself or did someone else? Find the facts here
Gatsby Girl
Gatsby Flapper Girl