It’s hard to believe that a novel nearly 100 years old would still be relevant today, but The Great Gatsby has that kind of staying power.

Daisy Buchanan is one of the main characters in this novel by F. Scott Fitzgerald, and while she may seem a weak, wishy-washy character, some of her quotes are just as valid today as they were in the 1920s. 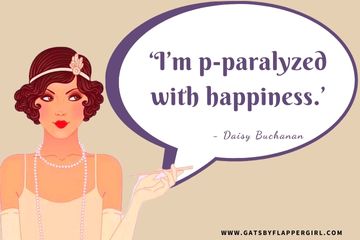 Discover what Daisy Buchanan is best known for saying, and how The Great Gatsby has withstood the test of time.

The very first introduction of Daisy Buchanan takes place in Chapter 1 of The Great Gatsby.

Nick Carraway, narrator and Daisy’s cousin, goes to her house in East Egg for a visit.

Daisy’s First Quote in the Book

Nick finds Daisy inside the residence, along with her friend, the famous golfer Jordan Baker, and Daisy’s first quote is—

Nick writes that Daisy laughed as if she said something witty and acted as if there was no one in the world that she wanted to see more than him.

Later in this same chapter, Daisy talks to Nick, revealing an inner sadness that doesn’t go along with her cheerful snobbery and says— 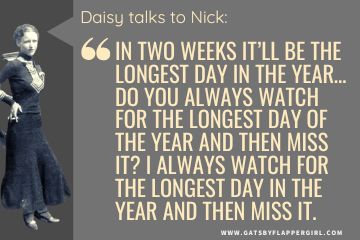 During this same conversation with Nick, Daisy Buchanan speaks openly about her disillusionment with life in general in this statement—

“I think everything’s terrible anyhow… I’ve been everywhere and seen everything and done everything.”

While it might appear that Daisy had everything in the world, she obviously wasn’t getting the attention that she felt she deserved or that she received when she lived in Chicago. You could read through her when she asked Nick—

We find out that Daisy and Tom Buchanan moved from Chicago to Long Island to get away from the rumors that Tom was having an affair.

Daisy married Tom for his money, but the artificial world that she lives in isn’t what she wanted.

Daisy Buchanan Quotes about Her Daughter

While Tom and Daisy’s daughter Pammy isn’t discussed at length, it’s important to note that Daisy does have a 2-year-old girl. This would make divorcing Tom and living with Gatsby even more difficult.

Daisy Buchanan Quotes about Being a Girl and a Fool

Daisy also appears to be depressed just thinking about what life holds in store for a young woman. 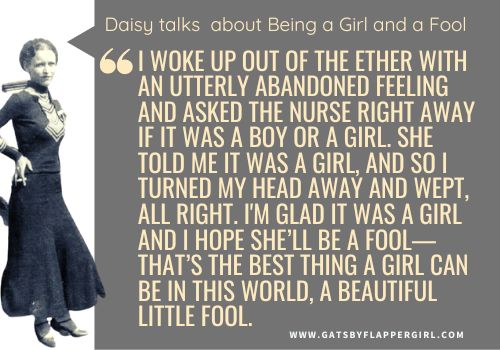 “You ought to see the baby. She’s asleep, she’s two years old. Haven’t you ever seen her?”

This quote seems strange since Nick hasn’t seen Daisy in years. Chances are that Daisy wants to show off her daughter to Nick, believing that at least Pammy is good, pure, and innocent since Daisy feels she no longer is any of those things.

Daisy came from a wealthy family in Kentucky. It only makes sense that she would marry a man of means. Daisy said this herself when she told Gatsby—

Of course, Daisy could have married Gatsby, the poor boy that he was, but money was more important to her.

Quotes about the Importance of Money to Daisy 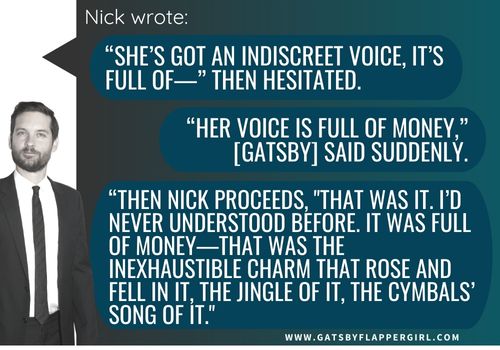 Daisy’s love of money caused her to make some poor choices in life. Gatsby recognizes this and tells Tom—

“She never loved you, do you hear? She only married you because I was poor and she was tired of waiting for me.”

Daisy, in fact, only appears to fall in love with Gatsby again after seeing his mansion and displays of his wealth, such as his collection of dress shirts.

Nick writes about how Gatsby took out piles of shirts, then another, until there was a heap of dress shirts of various colors, textures, and prints. Then— 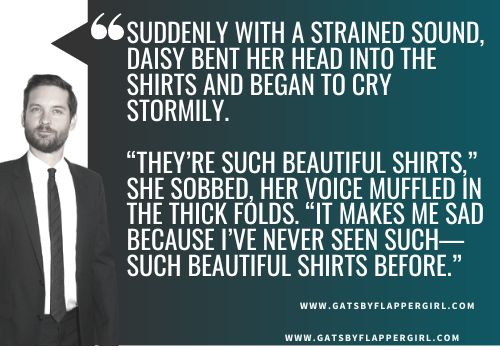 It seems silly that Daisy makes a big drama scene about ‘such beautiful shirts.’ Make no doubt about it, Daisy isn’t crying over his shirts, but her happiness in realizing that Jay Gatsby is finally wealthy enough for her tastes.

Unfortunately, coming from old money, Daisy quickly realizes that Gatsby’s new money, gained through bootlegging and other illegal activities, won’t buy her the status that she has become accustomed to.

After reading The Great Gatsby, one might question whether Daisy even knows what love is.

Daisy’s Quote the Night Before She Married Tom

Jordan tells Nick that, the night before the wedding, Daisy got very drunk after reading a letter from Jay Gatsby.

However, Daisy didn’t change her mind. She sobers up and marries Tom the next day.

Quote about Tom’s Love for Daisy

One must also wonder if Tom knows what love is. Perhaps having so much money gets in the way of how a person really feels? Tom describes his love for Daisy in this quote— 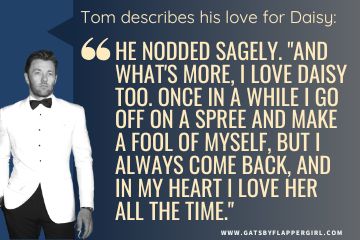 While Tom seems to think that men having affairs is OK, he doesn’t want Daisy to do the same, and he is shocked to discover that Daisy might love Gatsby.

As someone once said, the rich really are different.

With all her beauty, charm, grace, and her sweet and alluring voice, Daisy Buchanan is a weak, fickle, selfish woman who cares more about money and social status than anything or anyone else.

Daisy does appear to love Gatsby, but her “love” comes with certain conditions. She realizes that, while Gatsby has become very wealthy, he can’t give her the social status she requires. She knows that she is stuck with her husband, even though she doesn’t appear to like him very much.

While Daisy’s true character is slowly revealed throughout the book, it is her final action, moving out of their house in Long Island and not even bothering to send flowers to Gatsby’s funeral, that convinces Nick that Tom and Daisy are worthless people.

In the last three pages of The Great Gatsby, Nick summarizes what kind of people Daisy and Nick were by saying—

“They were careless people, Tom and Daisy—they smashed up things and creatures and then retreated back into their money or their vast carelessness or whatever it was that kept them together, and let other people clean up the mess they had made.”