The narrator of the novel, Nick Carraway, tells us that Daisy Buchanan and Jay Gatsby had an interesting love story in the Great Gatsby novel, written by F Scott Fitzgerald. Gatsby and Daisy first met before Gatsby went off to war. Gatsby met Daisy when his character was stationed near her home city in Kentucky. While he was about to go to war, Daisy promised Gatsby she would wait for him to return.

In chapter 4, the reader sees a drunken Daisy crying because she was reading an old love letter from Gatsby. Her new marriage was in jeopardy because she still loved Gatsby. Daisy and Gatsby had a relationship that always seems to be full of love, however always full of drama.

How did Gatsby find out Daisy was Married?

In the Great Gatsby, Nick informs readers that Daisy sends Gatsby a letter to tell him she moved on and got married. She later had a child with Tom. In a study of the summary chapter of the novel, Nick essentially tells the reader that it was very difficult for Gatsby to learn about her marriage, and spent most of the book heartbroken. While he did host parties at his house and make a lot of money in his lifetime, he was largely unfilled, always wanting to have Daisy back.

In Chapter 8, the reader finds out Nick encouraged Gatsby to leave Daisy, but he just can’t get himself to do it as he always seems to go back to her.

Did Daisy know Gatsby was Poor?

While confusing at first, it seems that Daisy did in fact know that Gatsby was poor, as she met him before he went off to war. Even though Daisy promised she would wait for Gatsby, she eventually married Tom and did get to have a baby with him. Gatsby was fascinated by Daisy’s rich and luxurious lifestyle, and he did at first lead her on to believe that he was of the same social status as her.

Meyer Wolfshiem is a character that sheds light on Gatsby’s poverty and tells everyone of Gatsby’s history. Generally an unsavory character, Wolfshiem does not do much to help Gatsby follow his dream of leading a luxurious lifestyle.

What happens to Daisy’s husband?

If you study the characters in this novel, all of the love affairs are complicated. Life in the big city will have that effect. The character of her husband is a tough, hardened man who has an affair with the character of Myrtle Wilson. Yet, then he turns and is upset when Daisy has an affair with Gatsby while they are still married. Nick informs the readers that Buchanan is actually the main antagonist of the entire Great Gatsby novel, as he is always getting in the way of Gatsby & Daisy. Myrtle was married to George, who she cheated on with Tom.

Tom does get upset when Myrtle dies, especially since it was Daisy who was responsible for her death, seemingly indicating that he had strong feelings for her, more than he would have if it was just an affair. This death also entangled Nick and Jordan Baker, a love interest of his who had a complicated relationship with the Buchanans. Jordan and Nick had a relationship, but Jordan was also involved with Gatsby at one point. If a study of their relationships was done, the reader would get quite confused.

How did Gatsby know Daisy?

In a study of the book, according to Nick, a primary man in the story, Gatsby, and Daisy have an on-again, off-again relationship throughout the book. The two of them are in love most of the time, but the timing does not always work.

There is a Green Light in the Great Gatsby at the end of Daisy’s dock that symbolizes the dream Gatsby has for his future. You can see that light day and night, in summer and in winter, a sign that his dreams are always present.

How do Gatsby and Daisy meet again?

In the novel, as we get to know Gatsby, he eventually settles down at a home in West Egg, New York out on Long Island. Gatsby’s car was one of his pride and joys, and he loved showing off his lifestyle in his fancy automobiles.

Gatsby arranges with Nick to slyly run into Daisy at his mansion, so he could show off his success. After some awkward moments with Gatsby, Nick, and Daisy, Gatsby eventually tells Nick he should stay, but eventually, Nick departs watching Daisy whispering into Gatsby’s ear.

The End of their Love Story

What happened after Daisy’s marriage to Tom? Members of the old money class, Nick tells the readers that Daisy and Tom did not have the best love story in the book. The summary of their marriage is that maybe they were in love at one point, but as Nick reminds the reader, ultimately they were better suited for other people – Daisy for Gatsby and Tom for Myrtle.

In a study of the summary chapter of the Great Gatsby, the reader should take away that the lives of all four of those characters would have been different if just one of them goes in a different direction. For example, if Daisy did wait for Gatsby she may not have ever married Tom. 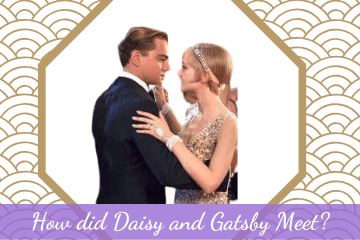 How did Daisy and Gatsby Meet?
Click here to learn more on Gatsby and Daisy and their love story in the Great Gatsby! Were they were lovers who always had poor timing and did their love last?
Gatsby Girl
Gatsby Flapper Girl