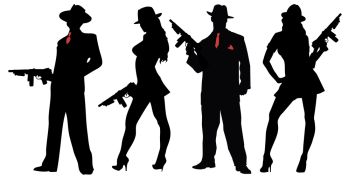 The gangster look from the 1920s never seems to go out of style. While you probably won’t see many businessmen dressed this way today, the gangster suit is still popular for formal occasions or even Halloween or costume parties. 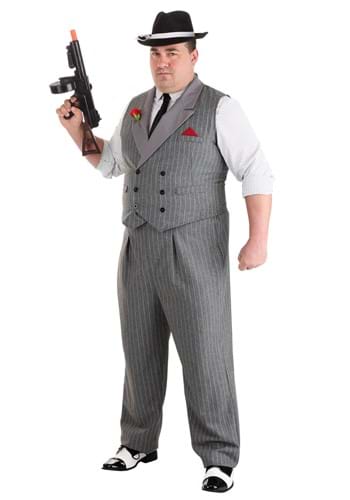 Get the Plus Size Suit

Gangsters in the 1920s meant business, and that showed in how they dressed. They looked sharp and important in their signature 3-piece suits (dark-color or striped) with short suit jackets and a double cuff shirt. They wear suspenders instead of a belt and complete their look with a pocket watch, a black band fedora hat, and shiny two-tone oxfords.

The way gangsters dressed in the ’20s made its mark, and you can almost guarantee that if there is a costume party or Halloween party today, someone will come dressed as Al Capone or Bonnie and Clyde. 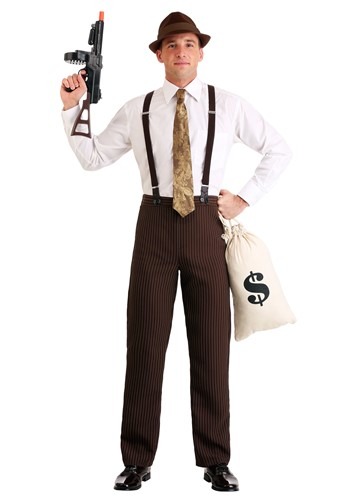 Get this Gangster Costume

Of course, you could also make your own fashion statement and dress as a gangster, but where do you begin?

One of the best things about dressing the part of a gangster of old is that men’s suits haven’t changed that much over the years. You simply need to pay a little attention to detail.

What Did Gangsters Like Al Capone Wear in the 1920s?

First, start off with dark suit jackets. Wear dark colors but not black unless it’s striped. Black wasn’t a popular color in the 1920s since it was a color one wore while in mourning. 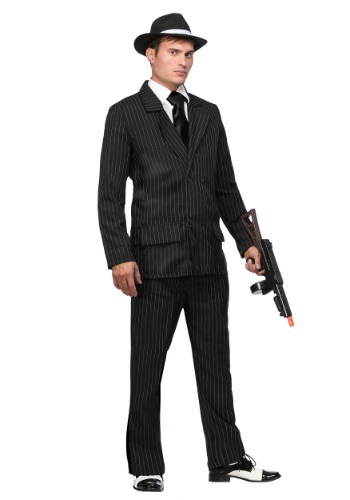 Striped suits were also popular but not the typical pinstripes you see today. The striped style in the 1920s was called chalk stripes, and it was not uncommon to see blue, grey, or brown stripes, as well as white.

The suit jacket was buttoned up with 3 or 4 single-breasted and double-breasted styles, and the buttons were placed quite high on the jacket, giving way to wide peak lapels. Gangster-style suit jackets always had a matching high V-neck vest and flat-front pants, not pleated.

Pant’s legs were quite narrow in the early ’20s. Not tight like skinny jeans but very narrow. By the end of the decade, pants legs became extremely wide. Pant leg lengths only came down to the ankles, which is very short by today’s standards.

Since gangsters had a lot of money, they wanted to put themselves on display. The suits were often made of the finest quality material and were very well-tailored. No sloppy, loose, or very tight-fitting suits for these bad boys!

The dress shirt style had a wide collar that was higher than the collars you will see today. It was important to wear a fine dress shirt in a color that would compliment the jacket. If the suit was plain and dark, it was not uncommon to see a colorful striped shirt underneath the vest. 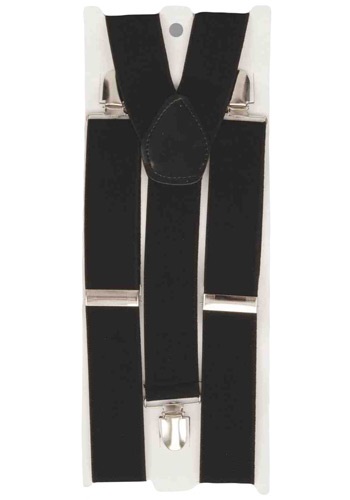 The vest was worn buttoned up. You rarely saw a gangster with an unbuttoned vest. Belts were not common so gangsters would wear suspenders, and a gold chain went across the buttons or a gold watch was often seen in the pocket of the vest, with the chain tastefully draped across the vest.

Ties were always worn, and the style of this era was a wide-knotted tie. You did occasionally see bow ties, but not as often. A contrasting tie or ties with flashy colors or striped ties were popular and a tie clip was essential, with many gangsters preferring to wear the tie clip up near the knot.

Snazzy cuff links were also seen. Jackets were typically cut a bit higher on the wrist, just so gangsters could show off their silk dress shirts and expensive cuff links. 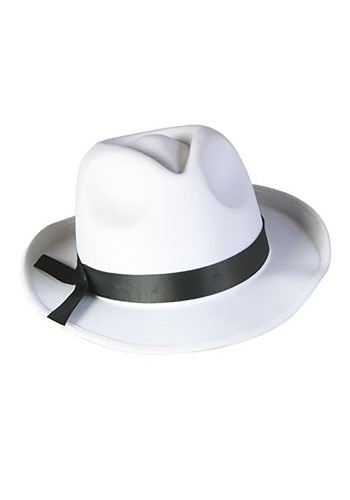 A fedora hat was popular in those days among gangsters. While many other men wore straw boater hats, a dark-colored or white hat with a black band fedora hat (sometimes a white band fedora) was favored by a 1920s gangster.

The final touch is the handkerchief in the jacket pocket. It should be a color that matches the shirt or contrasts with the shirt. 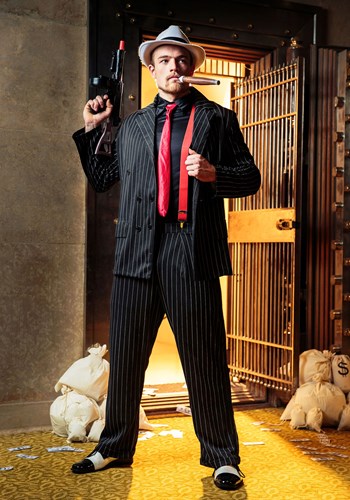 Get the Mob Boss Suit

If you’re planning on attending a costume or Halloween party, you can’t go wrong with this Mob Boss suit.

What would a gangster suit be without the proper shoes! 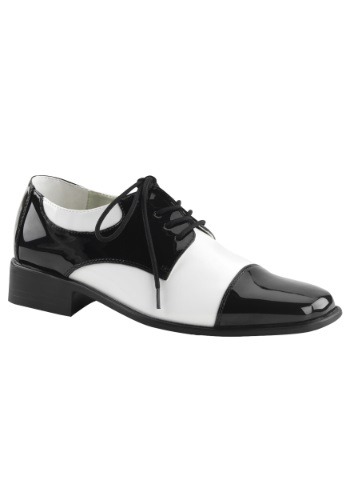 Most gangsters preferred the two-tone shoes known as oxfords. Brown and white oxfords were very popular, as were the cap toe oxford and wingtip styles. The 1920s gangster fashion styling also popularized spats, or spatterdash, which is an accessory designed to protect shoes and socks from mud.

Patent leather shoes, which are very shiny, were often seen on a night out, and lace-up leather boots, not work boots, were popular in the winter months.

The laces on these shoes were often very wide and men liked to tie them close together so that the tongue did not show. 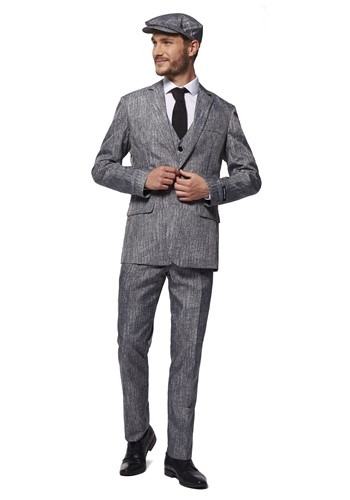 Get the Peaky Blinder Suit

No, there were other clothing styles that gangsters of the 1920s favored.

For more formal occasions, a full tuxedo was worn, often with a top hat and gloves.

For informal occasions, such as a weekend spent golfing outfits would usually include knicker pants, which stopped at the knee. Long, colorful socks which covered the calves were worn, along with a dress shirt, tie, and maybe a pullover style sweater or a suit jacket.

For other activities or outdoor work, short pants, known as jodhpurs, were worn. These also cut off at the knee or, more commonly, were very narrow (some even had laces to tie them to the calf) so they could be tucked inside boots or socks.

What Did They Call a Female Gangster?

While few women were actual gangsters themselves, there were plenty of them who loved and lived with powerful gangsters. 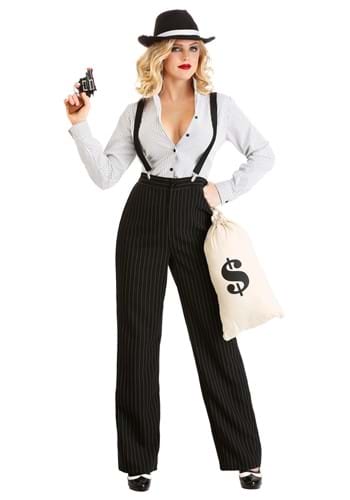 Get the Female Gangster Costume

Bonnie Parker of Bonnie and Clyde fame, was one female gangster who did her own shooting and killing, but most women simply enjoyed the company of gangsters.

Women who married or simply hung around with gangsters were called molls. It was not uncommon to hear a male call a female “Doll” during those years, so a Moll was equal to a mobster’s doll. 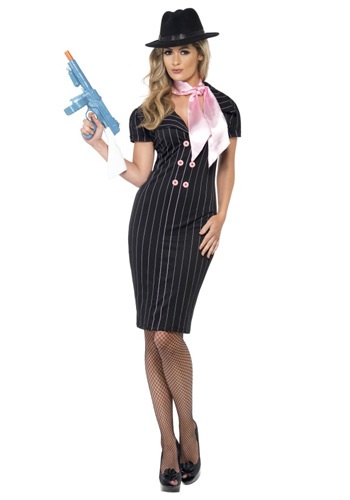 Get this Moll’s Outfit

If you want to dress the part, this moll’s outfit is very 1920s.

What Did Molls Wear?

At home with their man, a moll was sure to wear slinky lingerie. In the 1920s, women’s lingerie was more on the conservative side for the most part, but you can still find photos of women wearing some racy lingerie outfits.

Pantyhose had yet to be invented, so women wore silk stockings, usually with garters to hold them up. Corsets had gone out the window so many women wore lacy, revealing teddies. 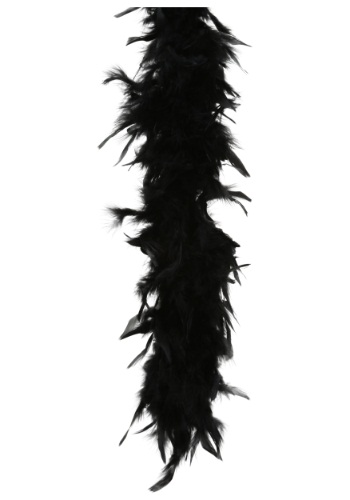 Get this Feather Boa

Silk robes and see-through sheer robes were popular, as well as feather boa and fur accessories.

On the street, molls were sure to wear the latest fashions in the best materials possible. Fur collared coats, hats (called cloches) with feathers and dried flowers, headbands with jewels or feathers, and dresses with long fringe were very popular.

If you’re looking for a sexy gangster costume for your next party, you might find these right up your alley. Plus-sized costumes can be found here.

Why Did the Gangsters of the 1920s Dress so Well?

While prosperity came to many in the 1920s, it didn’t find its way to everyone.

Gangsters wanted to show that they were just as rich and important as the bosses of major corporations. 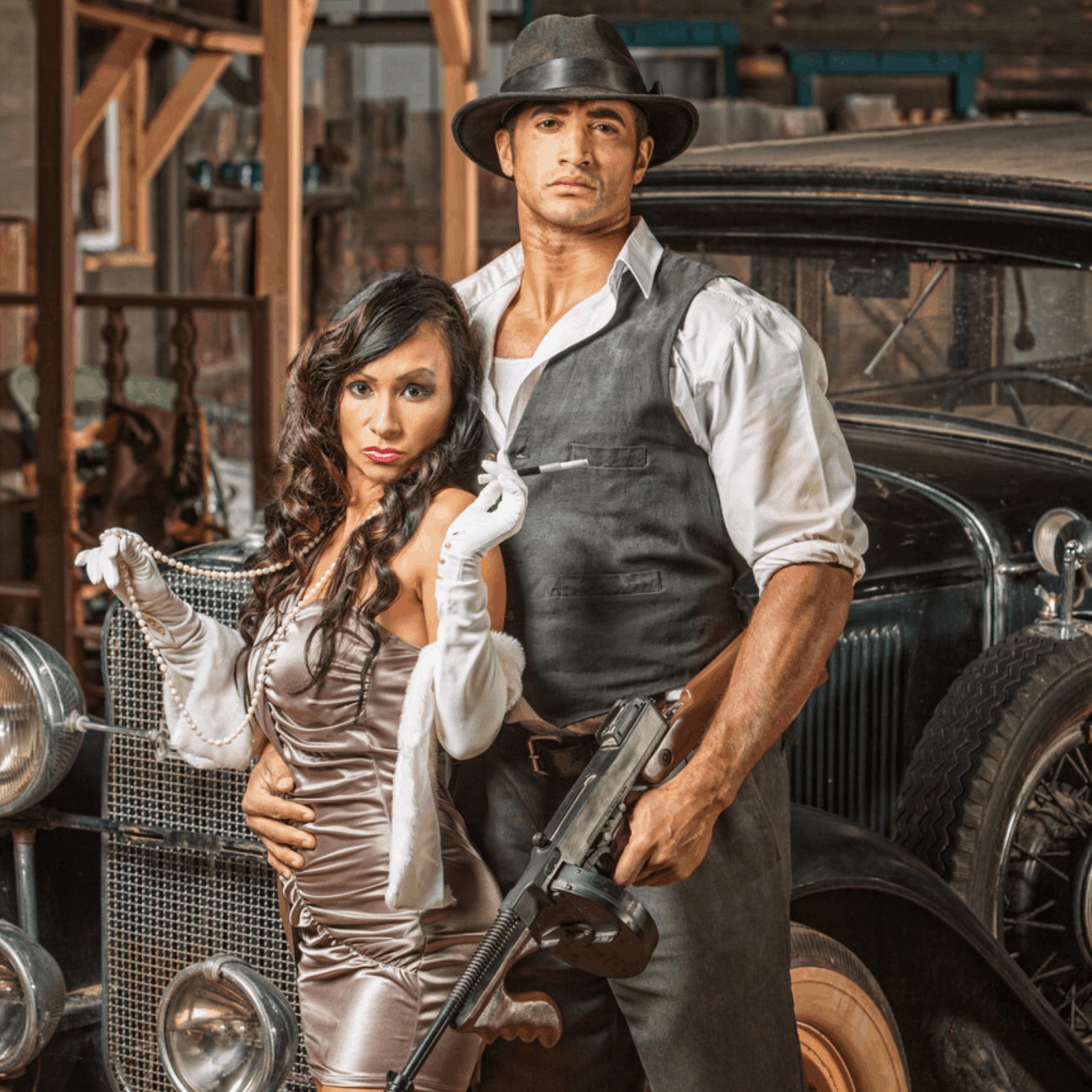 Expensive suits, gold watches, and nice shoes gave the 1920s gangster a polished look that few could afford. Over the top high-quality suits let regular people know that these mobsters were rich and important people, not back-alley thieves, an American robber, or immigrant hustlers.

Gangsters often grew up in their father’s dust fields so they didn’t want to dress the part of a poor, working-class commoner.

While we know that the 1920s gangsters (also called mobsters) were doing illegal activities, such as selling illegal liquor and killing people who refused to buy their liquor, they believed themselves to be upstanding businessmen, and they dressed the part.

Who Were the Top Gangsters in the 1920s?

If you’re looking for inspiration for outfits, you might want to check out the clothing these top gangsters were wearing in their day.

1. Al Capone – The most well-known gangster of all time has to be Al Capone. He was also known as Scar-Face due to razor cuts he received across his face for talking trash to another mobster’s sister. Capone was the richest of all gangsters, and he controlled the greater Chicago area with an iron fist. He died in 1947 from complications due to an untreated case of syphilis.

2. John Dillinger – Dillinger was another famous bootlegger, bank robber, and mobster of the 1920s. The newspapers loved to write stories about Dillinger, and it’s no wonder. He escaped from jail twice, once by carving a bar of soap to look like a gun. Dillinger died in a shootout with federal agents after his escort identified him by telling the feds she would be wearing a red dress.

3. Bonnie and Clyde – Another infamous pair of gangsters during prohibition and beyond. People loved to hear stories about Bonnie and Clyde, with many fake romantic encounters reported by attention seekers. Despite the fact that they killed 9 police officers and several civilians, this couple was mourned by the community after they were killed in a police ambush.

4. George Nelson – Commonly known as Baby Face Nelson due to his short stature and pudgy babyface. This well-known mobster was a close friend of John Dillinger. They died together in the same shootout with federal officers.

5. Machine-gun Kelly – Not the modern-day rapper, Kelly earned his moniker by carrying a Thompson machine gun with him everywhere he went. Kelly was a kidnapper and prohibition gangster who died in prison in 1954 after a heart attack.

6. Pretty Boy Floyd – He was popular among common people because when he would rob banks and destroy mortgage paperwork. Without proof that a person had an outstanding debt, the banks at that time could not collect. Pretty Boy Floyd robbed 30 banks in his lifetime and died in a shootout with the FBI in the early 1930s.

Was Al Capone the First Gangster?

No, he was a late-comer to the game.

The first organized gangs appear to have started in the 19th century in the Irish sections of New York City. 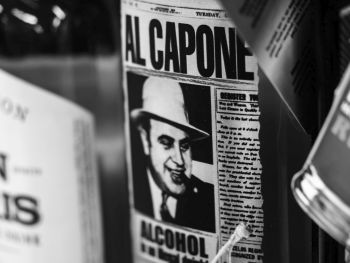 The Dead Rabbits and the Whyos were some of the first known gangs in the Americas. The Italians quickly followed with the infamous Five Points Gang, and then the Jewish gang known as the Eastman Gang came into power.

The Bowery Boys were second or third-generation immigrants who didn’t care for immigrants. They ruled lower Manhattan and were anti-Catholic, anti-immigrant (especially anti-Irish), and best known for killing someone without the slightest provocation.

America still has gangsters, but they are quite different from the ones of the 1920s.

Regardless of their illegal and notorious actions, gangsters of the 1920s had a classy and stylish way of dressing that many people still think of fondly.

While large brim hats and three-piece suits may no longer be the preferred style of dress, many people still long to return to those fashionable clothing styles.

Let’s skip the violence and criminal past of gangsters while we enjoy a return to yesteryear with men’s fashion outfits once more. How Did Gangsters Dress in the 1920s
The gangsters of the 1920s definitely had a unique style when it came to the clothes they wore. The style that defined the roaring 20’s still captivates us even today.