One of the main characters in the Great Gatsby is Tom Buchanan. He’s an interesting man, but is he a good man?

Nick describes Tom as a “hulking physical specimen” and a person with “two shining arrogant eyes.” Nick sees him as an arrogant, hypocritical person who believes that his old money makes him better than other people. 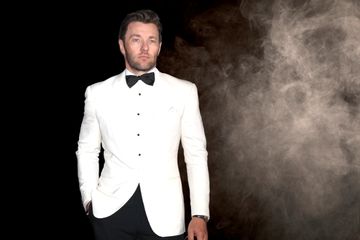 Most of The Great Gatsby represents various parts of American culture, including the American Dream.

Is Tom part of the American Dream? Or does he represent something or someone else? What does Daisy Buchanan and her friend Jordan Baker say about him?

Let’s delve into Tom Buchanan character traits and what he might be in F. Scott Fitzgerald’s book.

Unlike Jay Gatsby, Buchanan comes from old money. However, his immense wealth doesn’t appear to make him a better person. Tom is an arrogant, hypocritical man who Nick Carraway describes as a “hulking physical specimen.”

A Yale graduate, Buchanan was part of Nick’s social club in college. Other than playing on the college polo team and football team, Tom does not appear to have any desires other than playing his games and keeping his many mistresses happy.

Tom is also an arrogant man. Even his friend Nick describes him as having “two shining arrogant eyes.” Tom appears to believe that his money, which he inherited, not earned, makes him better than those around him.

Nick also calls him “Tom from Chicago.” This is apparently important to Tom since he will later describe Gatsby as “Mister nobody from nowhere.”

Tom appears to demand high moral standards from those around him but hypocritically doesn’t seem to think that those standards apply to him.

He has been having multiple affairs with poor women, and he thinks Daisy should be OK with it, but when he suspects Daisy’s affair with Gatsby, he becomes furious and creates an altercation at the hotel. 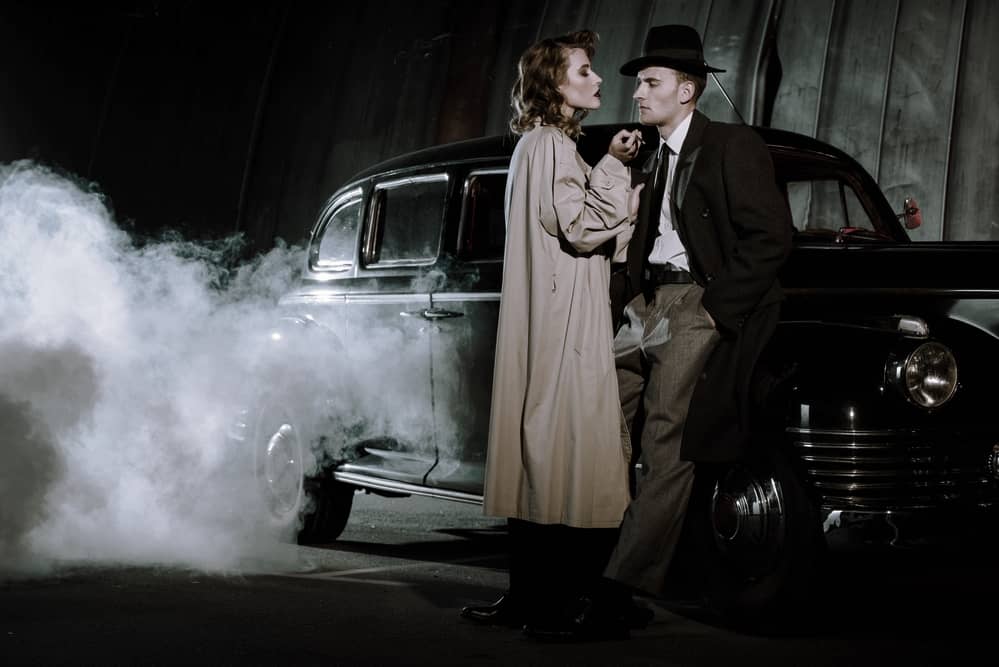 Tom is a sexist and racist man who, despite attending Yale, appears to not be highly intellectual. He treats women like cars, something to be used, abused, and then discarded for something new, and he believes that any non-white person is below him.

Although Tom Buchanan is an awful person, he does appear to love Daisy, even if he doesn’t always show her the respect she deserves.

He speaks about “the day I carried you down from the Punch Bowl to keep your shoes dry.” This would indicate a man who cares about his wife’s comfort, but if this is true, why is he having multiple affairs with women, even on his honeymoon?

In a Great Gatsby character analysis, Tom Buchanan comes up short on a likeability scale, despite his fancy riding clothes, wealth, and social status.

How Does Nick Describe Tom Buchanan?

Nick Carraway knows Tom from his days at Yale. Tom is also married to his first cousin Daisy. 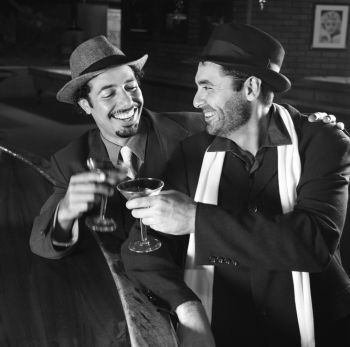 Nick provides a less-than-flattering description of his friend, calling him a “brute” several times and saying that he “had a body capable of enormous leverage—a cruel body.”

Tom uses his physical strength and bulk to intimidate people. Tom is described as having “arrogant eyes” and an aggressively leaning stance. A “straw-haired man with a hard mouth” are more words used to describe his friend.

Being the narrator, Nick could have used many words to describe his friend, but somehow almost none of the words he uses are nice ones.

Whether Nick felt this way about Tom while they were in college or he sees Tom more clearly now that they are men of the world, remains unknown. However, Nick paints Tom as a picture of a haughty, perhaps even narcissistic man who uses his wealth, enormous power, and physical stature to both impress and intimidate people.

Does Tom Buchanan Have Any Good Qualities?

While Nick Carraway doesn’t have many good things to say about Tom, he’s not all bad.

Tom does appear to love Daisy on some level. He’s worried about losing her to Gatsby. While he doesn’t shower her with affection, he does do nearly everything she asks. 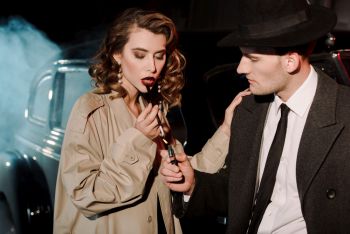 When Daisy wants to go to town, somehow thinking it will be cooler at the hotel, Tom doesn’t hesitate to offer to bring alcohol and take his car.

Whether Tom is afraid that Daisy would divorce him if he did hit her is unknown, but the fact remains that he does not appear to get physically violent with his family as he does with Myrtle, breaking her nose during their tryst at their Manhattan apartment.

Tom also appears, at least on the surface, to be somewhat generous. He offers to give George Wilson his car after it has been repaired. However, he also uses this to keep George subservient to him.

Tom Buchanan has very few redeeming qualities, but this is exactly what the author intended us to see.

Who or What Does Tom Buchanan Represent?

Tom is in the novel, and he represents the worst that rich people can be.

With a vast amount of wealth behind him, Tom has no ambition or desire to do anything constructive with his money other than play polo and play around with women. 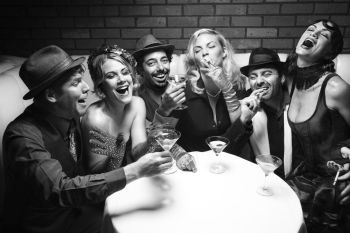 Despite Tom’s affair with Myrtle Wilson (and others), despite using George Wilson to get revenge on Gatsby, and despite controlling everyone around him, Tom Buchanan pays no price for his misdeeds.

Why? Because money allows him to escape justice.

F. Scott Fitzgerald had a deep disdain for the ultra-rich who use their money to maintain control of everything around them while they buy their way out of trouble.

As a result of Tom’s immoral behavior, two people needlessly die, and Tom seems OK with it. His presumptuous little flirtation with Myrtle causes her death as she tries to reach him. By telling George Wilson who drove the yellow car and where Gatsby’s mansion is, he becomes indirectly responsible for Gatsby’s death, too.

With his old money and good reputation, Tom and Daisy simply leave town, avoiding any questions, the police, or any involvement in the results of their actions.

Was Tom Buchanan a Racist?

Tom talks about a book he had read called The Rise of the Colored Empires, calling it “scientific stuff.” Tom seems to feel that white people are superior, and that they needed to not only keep order by passing laws but also to control and prevent interracial marriages. This appears to both concern Tom and fill him with fear. 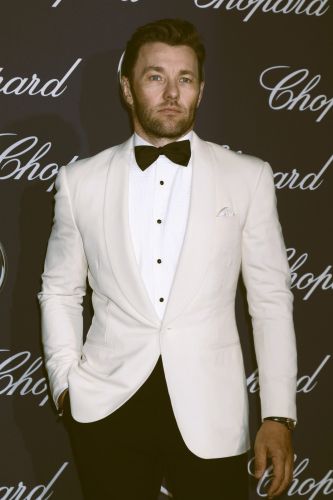 He talks about the book and the need for the superior white race to maintain control, and he says this out loud and in front of his black servants. This not only shows Tom’s arrogance but also his disdain for those who are not like him.

Does Tom Symbolize the American Dream?

It is Jay Gatsby who is the symbol of the American Dream. Gatsby starts his life dirt poor, but through his own hard work (albeit illegal work but work nonetheless), he manages to build an empire and tremendous wealth.

Tom Buchanan comes from an old family and old family money. He does no work at all but appears to be a member of the leisure class. 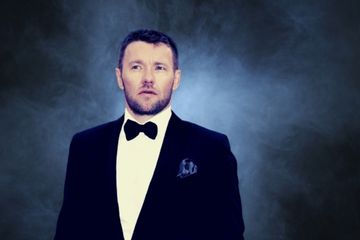 The American Dream of working hard, studying, and being a good moral person bringing you wealth and a home of your own is something Tom Buchanan knows nothing about.

In this novel, Tom represents the worst of the rich and powerful. Fitzgerald feels that they could and should do more for society as a whole, but they were merely “careless people, Tom and Daisy—they smashed up things… then retreated back into their money and let other people clean up the mess they had made.”

What Did Daisy Say about Her Husband Tom?

While it appears that Daisy was once madly in love with her husband, that seems to have faded.

Myrtle’s sister Catherine sums it up at the house party in Manhattan when she says, “Neither of them can stand the person they’re married to… What I say is, why go on living with them if they can’t stand them? If I was them, I’d get a divorce and get married to each other right away.” 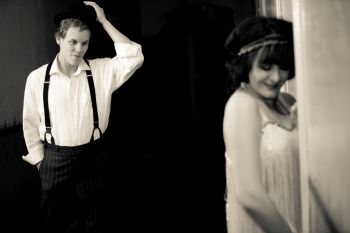 While Myrtle may not be able to bear being married to George, Daisy realizes that if she divorces Tom, she will lose a great deal of money and social status. This shows us that Daisy is not as pure and sweet as her cousin Nick leads us to believe.

Daisy knows that Tom has been having multiple affairs, but she does nothing about it. Why?

Although divorce was more attainable in the 1920s than it had been in previous decades, it still carried a heavy stigma and was seen as a scandal. Divorce was only allowed in situations where there was adultery, although exceptions were made in cases of bigamy or impotence.

Worse still, Daisy would have to present evidence and testify in court about Tom’s infidelity. This is not something that Daisy would probably be willing to do.

Daisy describes Tom as being “God knows where” while she was in the hospital giving birth. She knew that, more than likely, her husband was off somewhere having another fling.

While Daisy could be a strong person and leave Tom for Gatsby, she doesn’t. The social status, wealth, and easy life she has with Tom is more important to her, even though they don’t seem to love one another any longer.

Fitzgerald had great contempt for the ultra-rich, and he tells us about this with his character Tom Buchanan.

Buchanan is everything a person shouldn’t be but is, despite having more money than he knows what to do with.

Tom is a despicable person who uses his money and physical violence, as he pleases with no accountability. His money buys him anything and everything, including a way out of a jam.

Buchanan believes that he is better than nearly everyone else, especially the poor or people of color. He treats people as though they are something to be used. From the very beginning, Tom Buchanan shows that he has little regard for anyone, not even his new bride.

He uses this strength along with his wealth and position in society, to intimidate and control everyone around him. He is an arrogant man who looks down on those who are different from him, as well as those who are like him (rich and powerful) but who act or think differently. He has a terrible temper and becomes enraged when people have wronged him, but feels no guilt when he commits the very same actions against others.

Tom Buchanan isn’t living the American Dream, and he has contempt for those who are. Tom Buchanan's Character Traits from the Great Gatsby
In the Great Gatsby, Tom Buchanan has many interesting character traits. Is he the good guy? The bad guy? Who or what does he represent? Find out here
Gatsby Girl
Gatsby Flapper Girl