The Great Gatsby highlights three distinct places—the East Egg, the West Egg, and the Valley of Ashes. If you’re reading the novel, you may even look them up in the map.

F. Scott Fitzgerald used these symbols to represent the three social classes of his time. East Egg refers to old money, West Egg to new money, and the Valley of Ashes to the poorest of the society.

Such funny names, but this English novel wasn’t talking about different sides of an actual egg but of two places. Are these places real? What do they symbolize? What are the differences between these two places?

F. Scott Fitzgerald had a clear image in mind when he wrote about East Egg and West. Let’s dig deeper into The Great Gatsby.

No, they don’t. There are no such place as East Egg and West Egg.

However, while these are made-up names, it doesn’t mean that the entire location was dreamed up in Fitzgerald’s mind. They were based on actual places.

When Fitzgerald and his wife Zelda were newly married, they decided to save money by leaving Manhattan, where they were paying $200 a week for a hotel room. They went to Long Island, where they rented a house for $300 a month.

The Fitzgeralds lived in Great Neck, Long Island, a mostly blue-collar area that was full of bootleggers, stock brokers, and new celebrities, like Groucho Marx.

West Egg, where Gatsby’s mansion is located, is modeled after Great Neck.

East Egg is modeled after Sands Point, a city not too far from Great Neck where the very wealthy had resided for decades or even centuries.

While some people think that Fitzgerald was referring to East and West Hampton, it’s more than likely he was talking about Great Neck and Sands Point.

What Are the Differences Between West Egg and East Egg in The Great Gatsby?

It’s all about money. Back in the 1920s, many people came to America to find their fortune.

Some did this through hard work or lucky breaks finding oil on their property. Others found quick money through illegal means, such as gambling, bootlegging, or other endeavors.

Even if someone were to become wealthy through legal means, this hard-working generation was still looked down upon by families that inherited centuries-old wealth.

Old money (people who did not work for their inherited fortunes) did not like to mix with what was called new money.

While the East Egg rich still had some respect for the West Egg rich (money is money, after all), they felt that those in West Egg had less class and didn’t hold the same social status as the more established East Egg families.

As you might imagine, the wealthy of East Egg had a reputation for being careless, selfish, snobby, and spoiled.

However, the inhabitants of West Egg mostly acquired their money via illegal means, which gave them more power than most thought necessary over the lower classes. West Egg people were considered to be uncouth and lacking in the social graces of the time.

Other than the above mentioned differences, it appears that they didn’t differ much. East Egg and West Egg were more similar than different.

Folks with new money had mansions that were every bit as elaborate as the ones found on East Egg. Their money, although recently acquired, still allowed folks in West Egg to live as the old rich lived.

The basic principles appeared to be the same, with the only real difference between East Egg and West Egg being new money and old money.

What Does West Egg and East Egg Symbolize?

West Egg, East Egg, and the Valley of Ashes all symbolize what Fitzgerald saw as the class separations of his era.

West Egg is home to the newly rich. While West Egg has plenty of money, they are frowned upon as many of these people came from lower classes.

East Egg symbolizes the many generations of wealth that hold on to their old traditions and frown upon anything that might introduce change in their lives, such as what West Egg inhabitants might bring.

The Valley of Ashes, set along the railroad that ran between the Eggs and New York City, is where people worked hard and found themselves poor regardless.

Both the rich from West Egg and East Egg would use the train to travel through the Valley of Ashes, but they wouldn’t dream of stopping there unless necessary.

Why Did Nick Stay in West Egg? 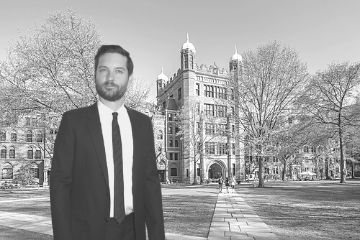 While Nick must have come from a somewhat wealthy family in order to afford to go to Yale University, it appears that he had some misgivings about living among the ultra-rich of East Egg.

Nick states that he views West Egg as the less fashionable of the two, but perhaps what Nick wanted was to prove himself. Since he was trying to sell bonds and work the stock market, Nick most likely thought that he was part of the West Egg crowd, rather than where the wealthy resided in East Egg.

While the names East Egg and West Egg are purely fictional, the places that Fitzgerald modeled these cities after were very real.

While many of these “old money, new money” thoughts are now out of fashion, 100 years ago, they mattered very much.

In these times, it is not uncommon to see present-day monarchs (old money) making friends with and inviting those who are recently wealthy to their parties and galas.

Still, the terms East Egg and West Egg give us a fascinating glimpse into Fitzgerald’s world of the 1920s. 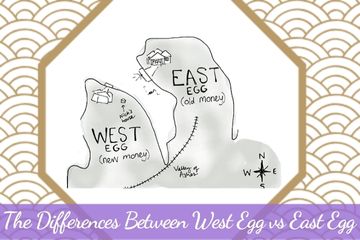 The Differences Between West Egg vs East Egg
In The Great Gatsby, the two main settings are West Egg and East Egg. Why such funny names? What are the differences? Find out here
Gatsby Girl
Gatsby Flapper Girl