Everyone knows that Bonnie and Clyde were killed in a Ford sedan in a tremendous display of gunpower by Texas Rangers, but whatever happened to the car? If it’s still around, what is it worth today?

Other questions remain regarding this couple, such as where are they buried? Were their bullet-riddled bodies really displayed in town? How many bullet holes did the car have? How many did Bonnie and Clyde’s bodies have?

Find out the facts about the actual car where Bonnie and Clyde died in and other facts about their two-year crime spree that ended in their violent death.

RELATED TOPIC:  How Long Did Bonnie and Clyde Run For

The Story Behind Bonnie and Clyde’s Death Car

The death car, as it has come to be called, was a 1934 Ford Deluxe 730 sedan that Clyde stole in Topeka, Kansas.

Ford cars were faster than most police cars at the time, which was the reason Clyde preferred to steal Ford cars. In fact, he loved this car brand so much that he once wrote a letter to Henry Ford saying-

I will tell you what a dandy car you make. I have drove Fords exclusively when I could get away with one. For sustained speed and freedom from trouble the Ford has got ever other car skinned and even if my business hasen’t been strickly legal it don’t hurt anything to tell you what a fine car you got in the V8″

The true owners of the stolen V8-engined Ford sedan were Jesse and Ruth Warren. Ruth says the car had been stolen right out of their garage on April 29th, 1934.

When Warren heard about her car, she asked the local sheriff to return it to her, bullet holes, blood, and all, once they were finished with it.

The sheriff claimed it would cost Warren $15,000 dollars to have the car returned to her. Considering that the vehicle cost $875 brand-new, Warren believed that the sheriff was simply trying to make money off of her Ford.

Ruth saw a money-making opportunity here, so she sold the car first to a carnival that was supposed to make payments on the vehicle.

After the carnival stopped making payments, Ruth repossessed the vehicle and began renting it to a company called United Shows, which eventually purchased the car outright.

Many people claimed fake “death cars”. One even went so far as to put chickens inside a car and shot the fowls to death, in a desperate move to replicate the bloodstains.

What Ever Happened to Bonnie and Clyde’s Death Car?

The original car eventually ended up being purchased by the casinos in Primm, Nevada, also known as State Line.

The original color of this custom-painted car was Cordoba gray, but it has lost some of its color over the years. Now it looks like more of a pale green. There is also a little rust, but the bullet holes and Clyde’s blood-spattered shirt are still there on display.

Bonnie and Clyde’s death car was located in Buffalo Bill’s Casino, Primm, Nevada until 2020 when it closed due to the coronavirus. It was moved for a time to Whiskey Pete’s Casino in the same city before it was moved to the Primadonna Resort, where it sits inside a glass cage.

Primadonna Resort gave the Ronald Reagan Presidential Library permission to display the vehicle for an exhibit in 2021.

The car, which is now part of American history, is expected to return to the Primadonna Resort (now called Primm Valley Resort & Casino) in 2022.  (You might also like to read my other article Bonnie and Clyde Artifacts – are they real deal or fake junks?)

How Much Is Bonnie and Clyde’s Death Car Worth Today?

The value of most things is whatever a buyer is willing to pay.

Ruth Warren bought the car originally for only about $800 back in 1934, but it has earned its various owners millions several decades later.

While we don’t know how much money Warren received for the vehicle when she sold it, Whiskey Pete’s Hotel & Casino in Primm, Nevada purchased the vehicle in 1988 for $250,000.

How Many Bullet Holes Were In Bonnie and Clyde’s Car?

There is a whopping 112 bullet holes in Bonnie Parker and Clyde Barrow’s death car. It’s been estimated that the Texas Rangers used 160 bullets in the attack on the infamous couple.

Clyde Barrow’s bloodstained shirt goes along with the vehicle. It is unknown how it ended up there, but the death shirt has been verified as real.

No one knows what happened to the dress Bonnie was wearing that day.

How Many Bullet Holes Did Bonnie and Clyde’s Bodies Have?

Deputies at the scene said that Clyde Barrow was hit first, with a shotgun blast to the head. He probably never knew what hit him, but Bonnie certainly did.

The lawmen who fired the fatal shots said that Bonnie had time to scream, probably because she saw what had happened to Clyde. The sound of her scream haunted many of the deputies for the rest of their lives.

It’s been said that Bonnie had 26 bullet wounds and Clyde’s bullet-holed shirt had 17, but his body overall had 25 bullet wounds.

The pair was so mangled that the funeral directors couldn’t contain the embalming fluid in the bodies.

Did They Really Parade the Bodies of Bonnie Parker and Clyde Barrow?

The bodies were left in Bonnie and Clyde’s car, which was towed back to Bienville, Parish, Louisiana. Once there, the bodies were put on stretchers and were supposed to be taken to the undertakers, but people in town wanted to see the couple.

As the bodies were paraded through town, people wanted souvenirs, or perhaps they thought that they might make some money if they could sell a small piece of the famous couple.

Remember that Bonnie Parker and Clyde Barrow died at the height of the Great Depression, so people were desperate to find ways to earn money.

It is said that people ripped off a small piece of clothing, and someone even cut off one of Clyde’s ears.

The bodies were sent back to West Dallas, where both the Barrows and the Parkers made the mistake of putting the bodies on display once again.

Are They Buried Together?

Bonnie Parker’s mother, Emma, refused to let her daughter be buried next to Clyde Barrow.

Clyde’s family wanted the pair interred together, leaving a space next to Clyde for Bonnie, but Emma Parker wouldn’t hear of it.

Bonnie Parker has only one living relative now, who says that she would like to see them together. Clyde’s relatives also want the pair reunited.

It appears that the only thing preventing this couple from being reunited in death is the money to do so.

There are many fake death cars, including the desert-sand color one from the 1967 movie Bonnie and Clyde, but the actual car has Clyde Barrow’s blood-stained shirt with his sister’s signature on the hem.

You can find this piece of history at one of the casinos in Primm, Nevada. 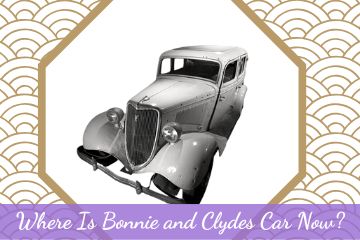 Where Is Bonnie and Clyde's Car Now?
We never tire of learning more about the criminal duo Bonnie and Clyde. Where is their death car now? Are they buried together? Find out more here
Gatsby Girl
Gatsby Flapper Girl