Daisy Buchanan is everything a wealthy young lady should be. She is charming, beautiful, graceful, and always polite.

However, behind those bright eyes and smooth voice lies a mother, a wife, a daughter, and a lover.

Is there more to Daisy than a pretty face and charming manner?

Let’s delve into Daisy Buchanan in this character analysis.

How Does Nick Carraway Describe Daisy?

Daisy and Nick are second cousins who apparently have seen one another in some time. She married Tom Buchanan, a wealthy football star from Yale.

Nick goes to the house in East Egg where Daisy lives (with her husband Tom Buchanan).

In the first chapter, Nick describes Daisy in this paragraph:

I looked back at my cousin, who began to ask me questions in her low, thrilling voice. It was the kind of voice that the ear follows up and down, as if each speech is an arrangement of notes that will never be played again.

Her face was sad and lovely with bright things in it, bright eyes and a bright passionate mouth, but there was an excitement in her voice that men who had cared for her found difficult to forget: a singing compulsion, a whispered “Listen,” a promise that she had done gay, exciting things just a while since, and that there were gay, exciting things hovering in the next hour.

Nick tells us that she was wearing white and that even her voice had a charm and sexiness to it that drew attention. Nick’s cousin is described as a Golden Girl.

Daisy does have positive attributes that befit a wealthy woman—charm, sophistication, gracefulness, and her generosity with praise.

When speaking of rich people, these are the traits and mannerisms that one would expect to find.

What Are Daisy’s Strengths and Weaknesses?

Daisy’s strengths are mostly superficial ones, including: 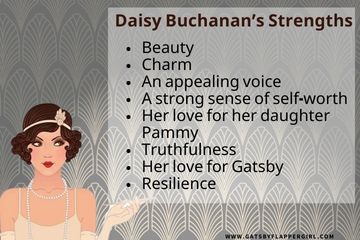 However, while some of these traits are admirable, we find that for every positive we find in Daisy, we find negatives that outweigh them.

Daisy’s life seems to revolve around Daisy and no one else, not even her daughter. In fact, all that she wishes for Pammy is for her to become a beautiful little fool—

“I hope she’ll be a fool—that’s the best thing a girl can be in this world, a beautiful little fool.”

Rather than be strong enough to challenge social norms, the best Daisy can hope for is that her daughter will be too stupid to see the truth.

This doesn’t say much for Daisy’s motherhood abilities and skills.

It also doesn’t speak too highly of Daisy herself, who seems to bend under the weight of societal expectations, rather than challenge them.

What Does Daisy Buchanan Symbolize? While F. Scott Fitzgerald loosely based Daisy on his wife, Zelda Fitzgerald, she does seem to lend the story a deeper meaning and parallelism.

While Gatsby’s entire world revolves around this woman, Daisy claims to love him (and Tom), while taking advantage of them both.

Daisy is a fickle woman who wants to be with “the winner”, whoever that might be. In this Daisy Buchanan character analysis, we can see that Daisy, who represents the ultra-rich, doesn’t really care about anyone else but herself.

Although Daisy claims to love Gatsby, she not only lets him take the responsibility for her actions, but she also ignores him even to his death. She can’t be bothered to send flowers to his funeral.

So much for loving a man “till death do us part.”

Daisy Buchanan is shallow, fickle, and hides behind her wealth and privilege, refusing to accept responsibility.

This is how Fitzgerald saw the ultra wealthy, and it doesn’t appear that things have changed much today.

Is Daisy Buchanan the Worst Character in The Great Gatsby?

It’s nearly impossible to name a “worst” character in this novel because everyone plays their part in the death of Myrtle Wilson.

Tom is cheating on Daisy with Myrtle. Perhaps if he had never done this, Myrtle would still be alive. Also, if Tom had not led Myrtle on and let her believe that he might one day marry her, she wouldn’t have been so desperate to go with him on that fateful night.

Tom is also guilty of telling George Wilson who the car belonged to, knowing full well that George was not in his right mind and may seek revenge.

Jay Gatsby should have stopped the car after they hit Myrtle. He could have insisted on driving, but his blind love for Daisy kept him from doing the right thing. Gatsby sacrificed his morals and eventually his life to pursue a woman who ultimately didn’t give a hoot about him.

Myrtle should have realized that if Tom wanted to divorce Daisy and marry her, he would have already done so. To continue to pursue a married man who was out of her league was completely immoral, not to mention uncouth.

Running after the car like a dog in hopes that Tom would save her was an act of desperation, but it did not deserve the death penalty.

Daisy has plenty of flaws herself, but her lack of responsibility is perhaps the worst of them. She doesn’t stop the car after hitting Myrtle, and she doesn’t accept responsibility for her death (even if it was an accident or partially Myrtle’s fault).

Moreover, as soon as there is a hint of a scandal on the horizon, Daisy gladly sacrifices the man she supposedly loves to run away with her husband.

Below are other minor characters who aren’t portrayed in a good light in The Great Gatsby:

As a main character, Daisy certainly has her flaws, but so does everyone else.

While Fitzgerald tries to paint Daisy as something pure and angelic (at least in the beginning of the novel), it’s fairly obvious that Daisy’s heart isn’t as true as she would like the world to believe.

At the start of the novel, Daisy represents everything that is clean, pure, and perhaps even enviable. She wears white, she’s surrounded by white flowers, and white flowing curtains sway in the breeze as she sits on a white sofa.

The reader might even come to see Daisy as a victim and her cheating, racist husband as the villain. However, as the book continues, we start to get glimpses into Daisy Buchanan’s character, and it isn’t as squeaky clean as she appears to be.

Daisy’s claims of love for Gatsby are quickly overshadowed by her need for a place in high society, money, and an easy life. She quickly betrays Gatsby when she realizes he can’t give her all of the above. For Daisy Buchanan, love is certainly not enough.

Everyone in the book has flaws, but Daisy appears to have no morals, no conscience, and no empathy for anyone but herself.