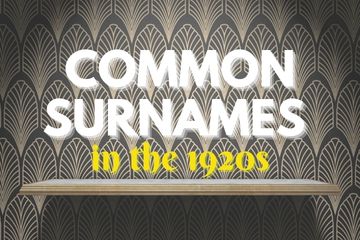 Everything old is new again, and this sometimes happens with surnames.

While some of us are born into and accept our parental last names, some people choose new names or use an entirely different last name for a variety of reasons.

This is especially true of African Americans who, once freed from slavery in the mid 1800s, were then able to pick a last name of their choosing.

Surnames come in a variety of ways and have an even wider variety of meanings.

What surnames were common in the 1920s? Let’s talk about the most common last names or popular last names from 100 years past.

What Were Common Surnames in the 1920s?

This would vary from state to state, and in the 1920s, there were only 48 states at the time.

For example, African Americans comprised over 99% of the people named Booker, undoubtedly influenced by the popularity of Booker T. Washington.

Other common black names were Lincoln, Abraham, and Freeman.

When it comes to last names, they can vary depending on the state and a person’s race.

Someone living in Los Angeles would likely have a Hispanic surname and someone from New York would be either Irish, Italian, or English.

The 1920s top 5 last names from New York are English/Irish/Scottish in nature: 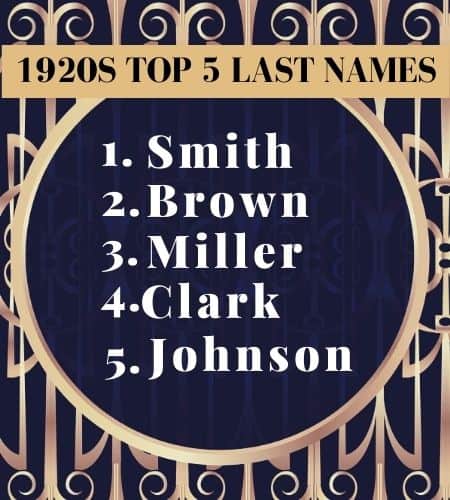 Smith remains one of the most common surnames even today.

Where Did People Get Their Surnames?

Most people acquired their surname from an occupation, a place, or from their father/grandfather.

It’s interesting to note, however, that surnames are something that is fairly new. Surnames were rarely mentioned 3,000 years ago.

It’s possible that the reason surnames began was due to a large number of people in bigger cities with the same first name. Something was needed to differentiate between all the Johns, Robins, and Williams.

This leads one to think about how you might make yourself known other than by your common first name.

1. Last Names from Fathers – For example, Robinson means Robin’s Son. Robin must have been a popular man in his time, so if you wanted people to know that you were his son, conversations such as, “Hi, I’m Dan, Robin’s son and I’m here to deliver your order,” would be one way to get your point across.

2. Last Names from Where People Lived – Other names came from the places people lived in, such as the surname Lee, which is an English term meaning a clearing in the woods, and Moore, a person who lived near the docks.

3. Last Names from Professions – Common surnames from professions include Smith (the metalworker or the one who made horseshoes), Miller (who ground wheat, flax, corn, etc.), Baker, and Clark (think of clerk).

Many last names are either the “son” of someone (Williamson, Danielson, Johnson) or a profession.

Some believe that surnames started in China, which makes sense, considering they’ve been the country with the largest population for untold thousands of years. 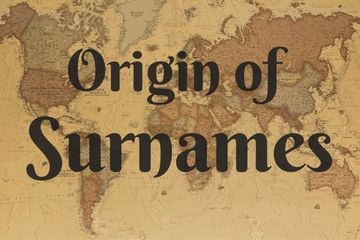 At one point, the government asked all citizens to take their father’s first name as their surname in order to track who was paying taxes.

So your name might be Chang, but your father’s first name was Tao, your name would be Chang Tao.

Europe didn’t catch onto the surname business until medieval times. Even then, surnames became a difficult thing in some instances.

If your name was John, for example, and you were a blacksmith, but the town already had 4 John Smiths, and if you lived in the forest, but so did two other John Forests, you might be given a nickname that would become a surname over time.

Common nicknames that became surnames might be Little John (if you were short) or John Book if you were known to read a lot, or perhaps even John Good if you were a good man who did charitable works.

What about Other Surnames?

Some surnames come from the way a person looks or from the deeds of their ancestors.

For example, Lewis is a German surname that means someone was famous for winning battles or King, for someone who came from royalty.

Other last names have to do with an ancestor’s appearance, such as Allen, which is English for handsome, White, referring to very light skin and blonde hair, or Thomas, which is an Aramaic term for twins.

Of course, we don’t always resemble our surnames now! Chances are that if your last name is Smith, you aren’t a metal worker and there are many African Americans with the last name of White.

Native Americans never bothered with last names because first names usually had multiple words and were quite unique.

When census takers began their tasks, they sometimes used part of a Native American’s first name as their surname.

For example, Little Red Bird might be tagged in a census with the first name of Little and the last name of Red Bird or they might end up Little R. Bird, using Red as a middle name.

What Are the Most Common Hispanic Surnames?

Hispanic last names are interesting since they often come from multiple countries.

Acevedo, for example, could be from Spain or Portugal. The name can also be spelled Acebedo since in Spanish, the letters B and V are quite interchangeable. 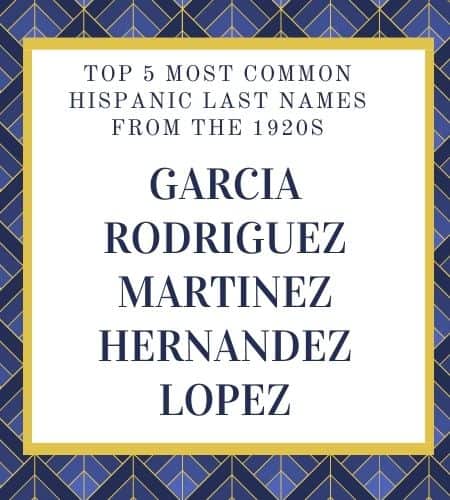 The top 5 most common Hispanic last names from the 1920s are:

1. Garcia (The Spanish form of Gerald, Garcia would be the son of Gerald. Gerald, however, is a Germanic name meaning ruler)

2. Rodriguez (Rodriguez is Spanish for the son of Rodrigo. If the name is spelled Rodrigues, the name is Portuguese but has the same meaning)

3. Martinez (Spanish for the son of Martin. Martin is a Latin name for the god of war, Mars.)

4. Hernandez (Spanish for the son of Hernando or Fernando. Ferdinand is a German name meaning voyager)

5. Lopez (Spanish for the son of Lope. Lope is Latin for wolf. If the name is Lopes, it has its base in Portuguese, not Spanish, but the meaning is the same.)

A Census Bureau study shows that the most common last names Rodriguez and Martinez have doubled in number from 1990 to 2000.

It’s easy to see how time can alter and change names to be quite different from the meaning we think of today.

Who knew that Lopez would mean the son of a wolf?

What Were Some of the Rarest Surnames?

Some last names are very difficult to trace, either because the meaning of the name has changed over time or because immigrants to America decided to alter their last names to be less stigmatized. 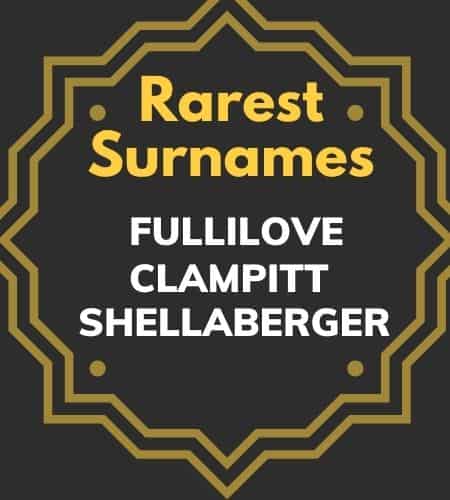 Someone named Giuseppe Petri would be immediately identified as Italian, so if an immigrant wanted a more American-sounding name, they might change it to something like Gerry Perry or George Petris.

More than a few immigrants simply guessed at what they thought an American name would sound like and used it, making the tracing of some surnames very difficult.

Some of the more rare and unusual surnames include:

1. Fullilove – Not “full of love”, as we imagine, but rather, this is a French nickname that means “living up to your name,” but WHICH name a person was living up to is unknown.

2. Clampitt – No, not the name from the Beverly Hillbillies, this name appears to be an old English name meaning mud pit, but why?

3. Shellaberger – There are only a few (around 3,000) Shellabergers in the world, and it’s meaning is unknown. There is a common German surname of Schellenberger, which leads one to believe that this name might have been changed over the years.

Common last names will vary from country to country, year to year, state to state, sometimes even city to city.

It’s not surprising to see that the most common surnames back in 1920 are still popular American names even today.

Recorded history will tell future generations what our popular names and last names are in 2022, much like the recorded names of the 1920s. 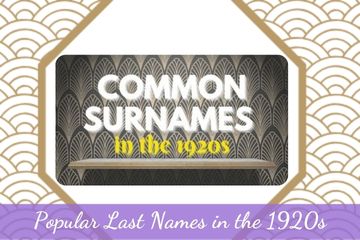 Popular Last Names in the 1920s
While we don’t always get to choose our last names, some names seem to appear more often than others. See how many last names from the 1920s you still recognize.
Gatsby Girl
Gatsby Flapper Girl