There are a lot of misconceptions and half-truths about the outlaw lovebirds Bonnie and Clyde, including myths that they gave money to the poor.

The truth is that there’s no proof or factual account about Bonnie and Clyde sharing their bounty to the poor or townspeople.

Even in this information age, it can be hard to dispel popular rumors romanticizing this couple.

Bonnie and Clyde were rumored to rob banks then return the money to town folks. A popular movie version shows Clyde ripping up mortgage papers and returning money to a bank customer.

Did any of this really happen? Were Bonnie and Clyde more like depression-era Robin Hoods or were they two-bit outlaws who didn’t share the wealth?

Did Bonnie and Clyde Give Money to the Poor?

While this stylishly dressed couple were not afraid to thumb their noses at conventional society, living a glamourous life robbing banks and running from the law, the facts don’t support the myth that they gave money to the poor.

If the truth be known, Bonnie Parker and Clyde Barrow were small-time thieves who had lots of weapons (due to the burglary of a gun store), but weren’t all that successful.

The biggest heist this couple made only netted them $1800. While that was quite a bit in the 1930s, it wasn’t as if they could live happily ever after on that sum of cash.

There are no reports of either Bonnie or Clyde giving back cash to citizens or landowners in town, although they were known to carjack someone and take the owner hostage. Later, once this couple believed that they were safe from the law, they would release the owner of the car and give them a few dollars so they could catch a bus back home!

Some have said that while robbing a bank, Clyde would look for mortgage papers and rip them up or take them with him. During this era, banks had to have a signed mortgage paper to collect monthly payments. If the bank’s original mortgage was destroyed or went missing, the homeowner was free and clear.

This is merely a rumor that has never been substantiated. It’s possible that people are confusing Bonnie and Clyde with Pretty Boy Floyd, who was well known for robbing banks and deliberately taking the time to look for and burn mortgage papers.

How Much Cash Did Bonnie and Clyde Actually Steal?

The exact amount resulting from Bonnie and Clyde’s crime spree is not known.

While banks can tell exactly how much cash was taken, this pair of criminals would also rob people standing in line at the bank, occasionally customers outside the bank, as well as people walking on the streets outside of town.

Bonnie and Clyde’s favorite targets were gas stations and small mom-and-pop stores. They were even known to break open and rob gumball machines outside the stores when they didn’t get enough cash.

During their two-year crime spree, Bonnie and Clyde recorded only 14 bank robberies, but they were known to rob countless gas stations and grocery stores, steal cars, and rob the people inside the cars. Their death car was, in fact, a Ford V8 automobile stolen from Ruth Warren.

When times were flush, Bonnie and Clyde gave money to their families. Clyde was especially big on family, and the entire Barrow family was a part of the gang.

The reverse was true as well. When Bonnie’s leg was burned in a car accident, Clyde’s mother, Cumie, would help get medicine for her.

She also made up “care” packages of clothing, food, and cooking utensils for the couple while they were on the run.

Bonnie and Clyde were known to stop by his mother’s house on a regular basis either to accept some much-needed help or to help out by leaving some cash for the family.

Bonnie and Clyde were known to split their bounty with other family members as well, including his brother Buck Barrow and even close friend Raymond Hamilton.

Whether other family members helped out Cumie isn’t known, but Clyde’s devotion to family would actually play a part in their betrayal and demise later on.

Clyde insisted that his partner in crime, Henry Methvin, take time to visit his father, who lived in Louisana.

It would be Henry Methvin’s father, Ivan, who would betray Bonnie and Clyde, resulting in the pair being shot to death on a rural road near Sailes, Louisiana.

Despite the popular movie lore that has Bonnie toting semi-automatic weapons, the truth is that Clyde would never have let Bonnie get anywhere close to danger, such as robbing a bank.

Like today, even in the 1920s, most banks had at least one armed security guard, and shootouts were common.

Bonnie either drove the car or waited at camp for the men to return.

When it came to robbing banks, it was Clyde’s friend Raymond Hamilton or his brother Buck who would assist Clyde in the crime.

Too many people believe the Hollywood and media hype that this pair of criminals lived in luxury, moving from one 5-star hotel to another 5-star hotel and robbing banks without peril.

The truth is that Bonnie and Clyde lived a hard life. They frequently camped under the stars, were bitten by mosquitoes, had to eat cold food or lived on sandwiches, and tried to hide out during the day for fear of being spotted by the police.

After Clyde wrecked their car ( learn where is Bonnie and Clydes car now ), he couldn’t even take Bonnie to a doctor or the hospital for her injuries for fear of being arrested. Only the kindness (and ignorance) of some strangers helped save Bonnie’s leg and possibly her life.

Bonnie and Clyde will live in infamy, but people should remember them as who they really were: criminals—not Robin Hood wannabes. 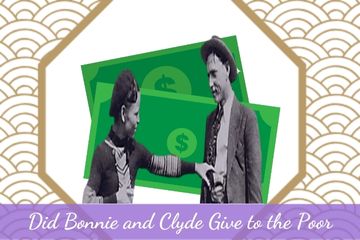 Did Bonnie and Clyde Give to the Poor or Did They Help Themselves?
Some like to think of Bonnie & Clyde as a 20th-century Robin Hood, but is this a myth, half-truth or fact? Find out the truth about this pair of criminals here
Gatsby Girl
Gatsby Flapper Girl