Bonnie Parker and Clyde Barrow are known around the world not only for their criminal acts but for their romance as well. They met for the first time in 1930 at the house of a common friend, Clarence Clay, whom Bonnie was visiting when Clyde dropped by.

It’s hard to think of anyone else who made headlines like this couple did. Yes, modern day folks like Kim Kardashian and Kanye West, or Brad Pitt and Angelina Jolie, are well known in entertainment circles. However, even the jailbird Casey White’s jailbreak with his prison guard accomplice Vicky White couldn’t match the fascination the public has with Bonnie and Clyde.

Where did this infamous couple meet? Did they stop robbing banks long enough to get married? How old were they when they hooked up?

Find out the fascinating details about these two sweethearts.

Where Did Bonnie and Clyde First Meet?

Many people mistakenly believe that these fugitives met in prison, but this isn’t true.

The facts tell us that Bonnie met Clyde in 1930 at a friend’s house in West Dallas. A few weeks later, Clyde was arrested, and it must have been love at first sight because Bonnie would visit Clyde in jail frequently.

The interesting thing here is that Bonnie was already married. She married her high school sweetheart, Roy Thornton, when she was just 16 years old. However, Thornton ended up in jail in 1929, leaving little time for Bonnie and Roy to get to know one another.

There is no mention that Bonnie went to see Roy very often, although he was in the same prison as Clyde.

In March 1930, Bonnie smuggled a gun into the prison, and Clyde used it to escape, but he was recaptured quickly.

Eastham Prison Farm was one of the worst prisons in Texas, if not the country, but Clyde wrote to Bonnie frequently. In fact, some of the letters have survived the years, and the affection they had for one another was clear since many letters use phrases like “honey”, “my darling”, and “little wife”.

It seems clear that this pair fell in love on sight, and that love withstood prison, escapes, and later, being on the run.

What Kind of Relationship Did Bonnie and Clyde Have?

Bonnie and Clyde are about as famous as the Shakespeare characters Romeo and Juliet, but did they really love one another?

It would appear so.

During a failed hardware store burglary attempt at which Bonnie was caught and arrested, she was sent to prison for a few months while she awaited trial. Bonnie wrote lengthy poems about loving her criminal man, Clyde Barrow, but the jury didn’t see those.

The jury believed that she must have been forced to commit that robbery since no decent woman would willingly agree to do these things.

As soon as Bonnie was free, she could have returned to her mother. She could have started over and led a life free from crime.

However, she did none of these things. Instead, she flew like a homing pigeon to Clyde’s waiting arms.

Clyde also seemed tremendously in love with Bonnie. After wrecking a car, the vehicle caught fire, and battery acid and flames burned Bonnie’s leg severely, down to the bone in some places.

He could have left Bonnie with his mother. He could have simply dumped her off at a hospital and kept on with his plan to rob enough banks to get revenge on the guards at Eastham Prison Farm. But he didn’t do any of those.

It’s said that Clyde nursed Bonnie himself. He used his family to obtain medicine, bandages, and laudanum from a pharmacy.

It’s rumored that despite her tough look in photos, Clyde never let Bonnie be directly involved in the bank robberies, and he would never have risked her life to break his buddies out of prison.

Chances are that she did, at least in the beginning.

By all accounts, Thornton was a very handsome fellow, but despite his good looks, he was already a hardened and bitter criminal by the time he met Bonnie.

Thornton had been involved in several shootouts and was always disappearing to either commit robbery or see other women.

It appears that Bonnie knew Thornton was seeing other women, and in her poems and letters, she seems to accept that men are just like this.

However, after he left her for the third time in a year, Bonnie was done with him.

She wrote a poem in her journal denouncing men and saying that “All men can go to hell.”

Almost two years to the day after she penned those words, Bonnie met Clyde and fell in love.

No, he didn’t, but not because he didn’t want to. Clyde gave Bonnie a promise ring, what we would call an engagement ring today, that he had made himself.

To get legally married, Bonnie would have had to show up in court and divorce Thornton, something that wasn’t a good idea considering that they robbed banks and were outlaws.

Being together and not being married made this couple even more appealing to the general public.

Although if you look at the crimes they committed, they were pretty terrible. After the police found some undeveloped film at the couple’s Joplin hideout in Missouri, they had it developed and then gave it to the local newspapers to publish.

The police believed that publishing their photos would make it easier to catch them, but what happened was the opposite. The photos of the young, good-looking criminals only made them more popular, and when they were sighted on the city streets, the public helped them escape more than once.

Why Were Bonnie and Clyde So Popular?

There are lots of reasons behind this couple’s rise to fame.

First, the fugitives robbed banks, which during the depression era endeared them to the throngs of people who were being evicted from their homes and whose farms were taken over by the banks.

While there were reports that Clyde returned some of the money he stole, there is no real indication that he did so.

What is known is that when this bitter criminal had extra cash, he sent it home to his mama. That gave these outlaws at least some good standing in the eyes of everyday people.

It was also the rise of technology that helped make this couple famous.

Both photographs and the printed press told people about the couple’s latest exploits within a day or two, not two or three months as was common in the past.

By sharing the loving photos of Bonnie Parker and Clyde Barrow, combined with the locations of their latest robberies and crime spree, the public was getting up-to-date information faster than ever before.

They kept a lookout in case the couple appeared in their city, and during the Great Depression, this type of entertainment was about as exciting as a TikTok live video.

Think of Bonnie and Clyde as old-time stars like Jennifer Lopez and Ben Affleck or the Kardashians.

Last, but not least, everyone loves a good scandal. A cigar-smoking woman handling a submachine gun, robbing banks, and living with a man who wasn’t her husband is about as scandalous as it got in the 1930s.

Where Did It All End for Bonnie and Clyde?

Bonnie knew what fate awaited them. In her infamous poem “The Ballad of Bonnie and Clyde”, she ends it with the phrase—

They know the law always wins

They’ve been shot at before, but they do not ignore

That death is the wages of sin.

Some day they’ll go down together

And they’ll bury them side by side

To few it’ll be grief, to the law a relief

But it’s death for Bonnie and Clyde.

Bonnie’s premonition came true, except the part where they are buried side by side.

The Barrow gang’s life of crime came to an end on a dirt road in Bienville Parish, Louisiana.

Texas Ranger Frank Hamer recognized a pattern to the couple’s travels. He and the local sheriff met with the father of Henry Methvin, who was Clyde’s companion and partner in crime, and arranged for an ambush.

Feigning a flat tire, Hamer placed Methvin’s truck across the road, while the rangers waited in the bushes.

Clyde stopped the car that he and Bonnie were using to help the father of his friend. The setup was complete, and when it was all over, more than 167 bullet holes were counted in what is now called the death car.

While gangster chic may be popular in Japan and other parts of the world, this couple killed at least 13 people overall in less than 2 years, not counting the number of victims who were injured in the shootouts.

Even Clyde’s own brother, Buck, was killed in a shootout with police officers.

The Barrow gang may seem like a love story for the ages, but there is plenty of blood and death on the hands of this couple that won’t be easily forgotten. 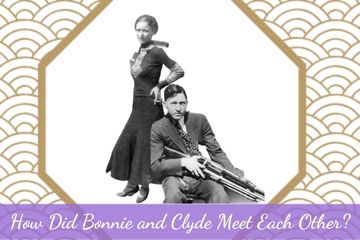 How Did Bonnie and Clyde Meet Each Other?
Bonnie and Clyde are perhaps the best-known criminal couple in the world. Where did these love birds meet? Did they ever get married? Find out what you don’t know here.
Gatsby Girl
Gatsby Flapper Girl