Some romance stories are told and retold over the years because we never seem to tire of them.

Romeo and Juliette, Cleopatra and Marc Anthony, oh yes, who could forget Liz Taylor and Richard Burton? However, none of the couples mentioned above could ever be mistaken for Bonnie and Clyde. Where did this couple come from?

Bonnie Parker and Clyde Barrow were both from Texas. Bonnie was born in Rowena, but grew up in West Dallas. Clyde Barrow, on the other hand, was born in Telico. At age 10, his family moved to Dallas, Texas.

The stories about this pair of criminal lovers is still being told today.

Bonnie and Clyde were admired in their day, but why? How did this couple meet? Were they really in love or just in love with crime?

This detailed article will separate fact from fiction. Let’s get to it!

Where Did Bonnie and Clyde Come From?

Clyde Chestnut Barrow (who often went by the middle name of Champion), was born on March 24, 1909, in Telico, Texas.

Separated by about 262 miles, these two met at a party in January 1930 at a friend’s house.

Who would have imagined that a simple meeting at a party would lead to the death of 13 people?

Where Did Bonnie Parker Grow Up?

Bonnie was the daughter of a mason, who died when she was only 4 years old. Bonnie’s mother, Emma, had no choice but to move back home with her parents to a suburb in West Dallas, Texas.

Bonnie married Roy Thornton just a few days shy of her 16th birthday. The marriage didn’t last long since Thornton was either on the run from the law or was in prison.

Minus her husband, Bonnie moved back with her mother and worked part-time as a waitress.

Where Did Clyde Barrow Grow Up?

He was the 5th of seven children. The family worked at various farms and moved to Dallas when Clyde was about 10 years old.

The family was so poor that when they first arrived in Dallas, they slept under the truck they came in until they could afford to buy a tent.

Clyde hated being dirt-poor so it isn’t surprising to discover that he was first arrested at the age of 17 for not returning his rental car.

Was Bonnie Considered Part of the Barrow Gang?

The Barrow Gang was only active for about 2 years, but they captured the attention of the nation. And, yes, Bonnie was very much a part of the gang.

The Barrow Gang consisted of: 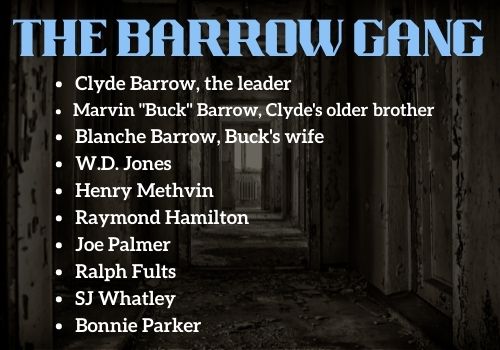 The majority of the men above were small-time crooks who earned a big reputation by being associated with Clyde Barrow.

They became well-known outlaws, robbers, murderers, and criminals who, as a gang, traveled the central United States and Texas during the Great Depression. Their exploits and criminal acts were known all over the nation.

Part of the appeal of the Barrow gang was the romance between Bonnie Parker and Clyde.

Did Bonnie and Clyde Have Famous Quotes or Catch Phrases?

While they may not have been aware of their growing popularity in pop culture, they knew well that their crimes were posted in newspapers around the country.

Clyde is said to have told Bonnie’s mother:

“Now Ms. Parker, don’t you believe what you read in all them newspapers. That’s the law talkin’ there. They want us to look big so they gonna look big when they catch us. And they ain’t gonna catch us.”

Despite being murderers, Bonnie and Clyde were close to their families and made frequent trips back to Dallas to see them.

When asked if he wasn’t afraid that the law would catch them at a relative’s house, Clyde supposedly told them:

“I’m even better at runnin’ than I am at robbin’ banks!”

While Bonnie and Clyde may have been close to their families, it doesn’t appear that Emma Parker was too fond of Clyde.

After the pair died, some suggested that the lovers be buried side by side. Emma Parker said that while she hadn’t talked to the Barrow family, she did not want a double funeral either. She told a local paper:

“Clyde had her for two years. Look what he did to her. Now she’s mine. Nobody else has a right to her.”

Of course, Bonnie Parker left several poems, as did Clyde, although Clyde’s poems were riddled with misspellings and grammatical errors.

Did Bonnie or Clyde’s Family Help Them?

Clyde’s family especially would help them out with clean clothes, a couple of meals, and even a few dollars.

While Bonnie and Clyde robbed quite a few businesses, they often got very little money. Their crime spree involved lots of little mom-and-pop-type grocery stores and gas stations.

These were small risks, but they also had small rewards, sometimes netting the couple as little as $80.

Just before they were killed, Clyde was attempting to buy some property for his parents in Louisiana.

Bonnie and Clyde were taught that family was everything, and that only the lowest scum on earth would ignore their family.

However, this devotion to family would lead to their deaths.

One member of the Barrow gang, Henry Methvin, was also devoted to his father. Bonnie and Clyde saw that as a good thing and tried to ensure that Henry could get back and see his dad as often as possible.

Henry, however, was conspiring with his father to betray Bonnie and Clyde. He planned to alert the police to their whereabouts in return for a full pardon.

Did the Public Ever Turn Against Bonnie and Clyde?

While newspapers greatly embellished stories regarding the pair, they also played up the romance angle. They depicted the pair as lovers who were only playing at being robbers.

However, on an Easter Sunday morning in 1934, Bonnie, Clyde, and Henry Methvin were sleeping in their car near Grapevine, Texas.

Two motorcycle cops banged on the windows, thinking these were vagrants or drunks sleeping it off.

The situation was now out of control, so Clyde shot the other officer, named H.D. Murphy.

What the trio did not know was that this was Murphy’s first day on the job, and that he was going to be married in a few weeks.

Murphy’s fiancee wore her wedding dress to the funeral.

The public was outraged that two police officers were shot on Easter Sunday, with one of them now leaving behind a bereaved bride-to-be.

Public sentiment turned against the pair in a whirlwind. Demands were made for the capture and killing of Bonnie and Clyde.

Where Were Bonnie and Clyde Finally Captured?

The pair had left Henry Methvin at his father’s house near Black Lake, Louisiana. They promised to pick him up on Wednesday, May 23rd.

Knowing the couple would be on the lookout for anything or anyone suspicious, law enforcement engaged the help of Henry’s father, Ivan Methvin.

Ivan Methvin parked his truck near the meeting place and removed one of the wheels as if changing a flat tire. This forced Bonnie and Clyde to stop the car since the road was partially blocked.

Bonnie and Clyde knew Ivan Methvin well, so they didn’t think twice. With no reason to be suspicious, the couple stopped their car to assist Methvin.

Texas Ranger Hamer gave the signal and his 6-man posse fired, killing Bonnie and Clyde in a hail of bullets.

It’s interesting to note that a man named Dillard Darby, who had been kidnapped by the Barrow gang a year earlier after his car had been stolen by the gang, was an undertaker.

Bonnie was morbidly tickled to discover that the man they’d kidnapped was an undertaker. She brazenly asked Darby to take care of the gang’s mortuary needs in the future and even gave him $5 before releasing him.

Surely the couple thought this little exchange was amusing. Little did Clyde and Bonnie know that Mr. Darby would indeed attend to them after death.

What Happened to Henry Methvin?

Although Henry Methvin’s father had arranged to get his son immunity from the murders of the two motorcycle officers, this immunity did not include the murder of an Oklahoma Constable named Campbell, for whom Methvin was wanted.

It is unclear if Ivan Methvin knew about the Campbell murder, or if he simply hoped that his son would beat the rap.

Henry Methvin went to prison for Campbell’s murder and was paroled in 1942, only 8 years after Bonnie and Clyde’s death.

On April 19, 1948, Methvin was completely drunk and attempted to cross a railroad track. He was killed by an oncoming train.

While some speculate that a member of the Barrow family pushed him in from of the train, no evidence to support that claim has ever been found.

Bonnie and Clyde were lovers who didn’t seem to care about the lives of others or about their crime spree.

Numerous photos were discovered at a house in Joplin, Missouri, where the couple and the Barrow gang would hideout.

Most of the photos are playful in nature, with Bonnie smoking a big cigar and holding an even bigger gun. There are photos of Clyde being “held up” by Bonnie and other photos where they pose with guns and a stolen automobile. 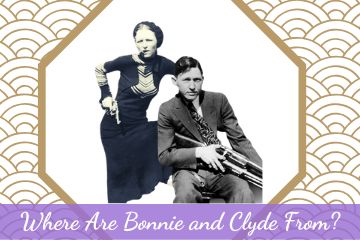 Where Are Bonnie and Clyde From?
Perhaps Bonnie and Clyde were the most famous gangster couple, but where did they come from? Did they kill many people? Find the gory details here.
Gatsby Girl
Gatsby Flapper Girl