Two of the most notorious criminals who ever lived were Bonnie Parker and Clyde Barrow.

They robbed banks, gas stations, and small grocery stores, and killed at least 14 police officers. Their criminal life ended in a bloody ambush set by six police officers with the help of the father of one Barrow gang member.

How long did this crime spree last? Where did Bonnie and Clyde meet their end? Did the undertaker complain about the condition of the bodies?

Find out the real facts about this notorious couple.

How Long Were Bonnie and Clyde on the Run?

Clyde Barrow had been in trouble with law enforcement officials since he was 17. In fact, he went to jail just a few weeks after meeting Bonnie Parker at a friend’s house. After spending 20 months at Eastham prison farm, Clyde met up with Bonnie, and the two started their life of crime.

While it may sound like this couple was on the run for a decade, their life of crime was only 21 months long.

It’s possible that Bonnie and Clyde, along with the other criminals who made up the Barrow Gang, could have stayed on the run longer, but they were betrayed by the father of Henry Methvin, a good friend and member of their gang.

Bonnie and Clyde, starring Warren Beatty and Faye Dunaway was a made-up Hollywood account of the couple that was far more inaccurate than it was accurate.

Some people have said that the movie was 90 percent fantasy and only 10 percent reality.

For example, while the movie states that Clyde would only rob banks that were foreclosing on poor farmers or widows, the truth was that Clyde didn’t actually rob too many banks.

Banks usually had armed guards, and Clyde wasn’t about to be shot to death or taken to jail. Instead, Bonnie and Clyde often robbed small grocery stores, liquor stores, or gas stations.

Robbing the working class doesn’t fall in line with the Robin Hood image of the Hollywood movie.

Both Bonnie and Clyde came from the slums of Dallas during the Great Depression. Some say that Bonnie was simply bored and, to cure her wanderlust, she hooked up with Clyde Barrow who always had a stolen car with him. However, the movie leaves out the fact that Bonnie had smuggled a gun into prison in an attempt to free Clyde.

Did the Undertaker Complain about the Condition of the Bodies?

While the exact number of bullets that hit the couple is not exactly known, Ted Hinton, one of the Texas Rangers who arranged the ambush, said that the six officers opened fire and used at least 150 rounds between them.

There are estimates that Bonnie Parker had 26 bullet holes and Clyde had 17, but other figures say that both sustained at least 25 or more gunshots.

This made embalming the couple quite difficult with the undertaker supposedly asking for help from another undertaker to find some way to keep the embalming fluid inside the bodies.

Are Bonnie and Clyde Buried Together?

No, they aren’t, but there are calls for that to happen.

Bonnie Parker’s mother, Emma Parker, refused to let her daughter be buried alongside Clyde. While the cemetery had dug a second grave for Bonnie, Emma did not want her daughter to spend eternity next to Clyde.

Bonnie’s mother is reported to have told a newspaper that:

“Clyde had my daughter for two years. Look what he did to her. Now she’s mine. No one else has a right to her.”

Clyde Barrow is buried next to his brother Marvin. He rests at Western Heights Cemetery, while Bonnie is buried at Crown Hill Cemetery.

However, Bonnie’s last living relative, Rhea Linder, has said that the couple always wanted to be buried side by side and she thinks that’s the way it should be.

Buddy Barrow, a relative of Clyde, agrees with Rhea Linder, saying that there’s still an open spot next to Clyde, so why shouldn’t Bonnie join him?

It’s possible that this couple may be reunited in the near future.

How Were Bonnie and Clyde Killed?

Criminals appear to have their own code of conduct. While this pair used machine guns for their bank robberies and seemed to live in a stolen automobile most of the time, they thought family was very important.

One member of the Barrow gang was Henry Methvin. Henry would visit his father, Ivan, on occasion, in Louisiana, which Bonnie and Clyde thought was a sign of a good man.

While Henry may have been OK, his father was concerned about him.

Ivan Methvin contacted law enforcement, asking that if they helped set up Bonnie and Clyde, would his son be able to get immunity from the Easter Sunday killing of two police officers.

Assured that his son would be OK, Ivan knew that Bonnie and Clyde were going to return to pick up Henry on Wednesday, May 23rd.

Ivan had told the police that if the couple saw anyone they didn’t know or any suspicious vehicles, they would bolt.

So, Ivan took his truck and parked it across the road. He then removed a tire, making it appear that he was changing a flat.

Bonnie and Clyde saw no reason to not trust Ivan, so they not only stopped their car, but they also got out of the car to help.

While Texas Ranger Frank Hamer had intended to take the couple alive, there was some miscommunication. One of the six officers opened fire.

Bonnie and Clyde attempted to get back in the car and drive off, but the hail of bullets was too much for the couple, and they died by the side of the road.

It’s rumored that Bonnie still had a piece of sandwich in her hand (or near her body.

Is the Road Where Bonnie and Clyde Died Still There?

Yes, it is located on Highway 154, not far from Gibsland, Louisiana, close to the Texas border. There is a marker that was added in 2014, honoring the lawmen and not so much the criminal couple.

If you’ve seen the Netflix movie “The Highwaymen”, the death scene where Bonnie and Clyde met their tragic end was filmed on the same strategic spot where the couple actually died.

You can still drive there and see the location for yourself. Despite being 90 years in the past, the area has changed very little.

There is also a museum dedicated to the criminal lovebirds located in Gibsland.

Where Is the Death Car Now?

The stolen car that Bonnie and Clyde died in is frequently referred to as the death car.

The car itself has been just as popular as the couple who died in it.

Immediately after their deaths, Ruth Warren, the owner of the stolen car (a 1934 Fordor Deluxe), wanted it returned to her in spite of the 112 bullet holes.

The sheriff told Warren that she would have to pay $15,000 to get the car back. Where the sheriff came up with that amount is unknown, but Ruth Warren did not take this lying down.

Warren sued the sheriff and won. She got her car back but then tried to sell it to a company called “United Shows”, who hoped to make a nice profit.

When United Shows stopped paying, Warren repossessed the vehicle and rented it to a carnival owner, who took the vehicle all across America, charging the curious to see the vehicle.

The carnival eventually purchased the car outright from Warren.

Copycat cars popped up everywhere, and some of them were very authentic looking. However, the real car also has some “accessories” that belonged to Bonnie and Clyde, including Clyde’s saxophone, his bloody, bullet-ridden shirt, and Bonnie’s clothing.

The car has been on display behind a glass case for decades.

In 2022, it was moved temporarily to the Ronald Reagan Library for a display entitled “Al Capone to Al Queda- the FBI Story”.

It should be returning to the Primm Valley Resort & Casino later in 2022.

Interesting Facts About Bonnie and Clyde

Some little known facts about this couple and their violent crimes include:

You can see a more accurate portrayal of the couple and their deaths in the movie The Highwaymen.

While there are some people who believe that Bonnie Elizabeth Parker was nothing more than a dumb girl who went along for the ride to get out of work and household chores, there is plenty of evidence to show that she knew what she was doing.

In a poem Bonnie describes her premonition of their deaths, saying: 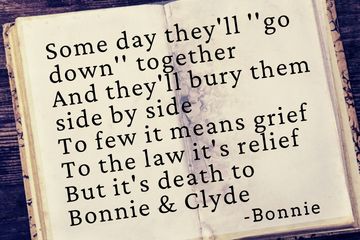 Bonnie Parker and Clyde Barrow’s bloody death, as well as their short-lived life of crime, is now a part of American history for all time. Bonnie and Clyde Cause of Death: The REAL Facts!
Everyone has heard about Bonnie and Clyde, but not as many people know about their grisly deaths. Find out the real facts about how these lovers lived and died.
Gatsby Girl
Gatsby Flapper Girl