For anyone reading The Great Gatsby, you quickly discover that Jay Gatsby throws incredibly lavish parties every weekend at his mansion. Why is Gatsby doing this? There are two reasons Jay Gatsby spends a fortune for his weekly parties. First, it’s one way to get his name recognized and earn a reputation. Second, which is his main reason, he hopes that Daisy somehow hears about him and comes to one of the parties.

Let’s talk about the ultimate party giver, Jay Gatsby, and why he feels compelled to throw these outrageous parties at his estate.

Why Does Gatsby Hold a Party Every Week?

There are two reasons behind Jay Gatsby’s apparent love of parties.

The truth is that Jay Gatsby isn’t really a party-goer himself. In the third chapter, narrator Nick Carraway tells us that Gatsby (read more on Nick Caraway’s Character Traits ) seems aloof and separate from the people he sees at his parties.

It isn’t that he’s hiding, but he also isn’t dancing or watching the festivities. Instead, we find Gatsby talking to others and glancing around his estate, as if looking for someone. First, Jay Gatsby doesn’t mind giving these parties since he knows that he will quickly get name recognition. This can be advantageous if you are hobnobbing with politicians, law enforcement, lawyers, and even celebrities.

For someone who has come into his fortune via new money, Gatsby knows that earning a reputation will take time and a great deal of money to get his name recognized.

Huge, elaborate parties where everyone is welcome is one way to get recognition and earn a reputation. It might not be the reputation Gatsby was hoping for, but perhaps he sees this as his “foot in the door” opportunity.

Gatsby’s Grand Plan: The True Motivation Behind the Parties

The main reason behind these parties, however, is much more personal.

The reader should keep in mind that everything—simply everything—that Gatsby has done has been in pursuit of Daisy.

Even inviting Nick Carraway ( learn more on Who Is Nick Caraway ), Gatsby’s neighbor, was part of his grand plan to get Daisy back into his life.

Jay Gatsby hoped that by giving parties that would soon become the talk of New York, Daisy would show up to either see the mansion or check out the party. She might even hear Gatsby’s name and come to one of the parties to see if it was the same Gatsby she had met 5 years before.

So while Gatsby’s main purpose behind these extravagant parties was to impress Daisy and lure her back to his side, he also saw a value in becoming well-known.

He may have hoped that these parties would make him respectable, but unfortunately, that doesn’t happen.

What Do Gatsby’s Parties Symbolize?

Gatsby has these parties so often for nearly the entire novel that they actually become a theme of the book. No doubt Scott Fitzgerald was trying to symbolize the times that he was living in ( read interesting facts about F Schott Fitzgerald ). This era was not called the roaring 20s for no reason.

Gatsby’s parties symbolize the glamorous lifestyles that many found themselves enjoying during the Jazz Age, thanks to the new money people were earning via bootleg liquor.

Author F. Scott Fitzgerald was also showing how the newly rich were trying to buy their way into the American Dream ( read famous F Scott Fizgerald Quotes ), which was now corrupted.

Old-money people would never accept new money and found them vulgar and/or pretentious.

Those who had newly found fortunes were clueless and continued to attempt to buy their way into respectability, rather than earn it.

What Is Ironic about Gatsby’s Parties?

When the parties are over, Gatsby is alone (save for the boarder).

All his money, all the money he spends on these parties, his mansion, his car, his hydroplane, and his swimming pool can’t buy him the respect he wants from others. Neither will it buy the friendships that every man needs nor the love of the woman he is obsessed with. Gatsby dies in possibly the loneliest funeral with no one attending (other than servants). His associates and friends decline to attend his funeral or send flowers even after so much persuasion from Nick Carraway. Daisy, the woman who claimed to love Gatsby, acts like his death doesn’t matter.

Jay Gatsby believed that an abundance of cash would solve all his problems. In the end, it only brought him disappointment and, eventually, death.

Why Does Gatsby Stop Giving Parties?

If you’ve read this novel, you may realize that at one point, Gatsby stops giving parties, but why?

We are introduced to Gatsby’s parties when Nick is invited to one, and he finally attends in Chapter 3. You can read The Great Gatsby Chapter 3 summary here.

By Chapter 7, however, you find that Gatsby no longer throws these outrageous parties. What happened?

The detailed answer is fairly simple: Gatsby gets his girl, Daisy.

After Nick invites his cousin Daisy to tea at his cottage, Gatsby shows up, allowing these two to meet once more on neutral ground.

They are both still smitten with one another. Gatsby takes Daisy to his mansion next door. She is impressed and thrilled to see that Gatsby has the money she would need to feel secure and happy.

While the novel is rather vague about the details, we learn that Gatsby not only stops throwing his famous parties, but he also fires most of his staff.

Daisy and Gatsby are having a torrid affair. Gatsby is concerned for Daisy’s reputation, so he keeps only staff that he trusts not to betray their afternoon trysts.

Gatsby no longer needs to throw these parties because he has his coveted prize, Daisy, and he doesn’t want anyone possibly discovering the truth about his affair with Daisy.

At least, not until Daisy is ready to leave Tom Buchanan and come live with Gatsby.

Some of the best-known quotes from this novel are about Gatsby’s elaborate parties.

Jordan Baker attended many of Gatsby’s parties and explained them to Daisy’s cousin, Nick Carraway, thus: 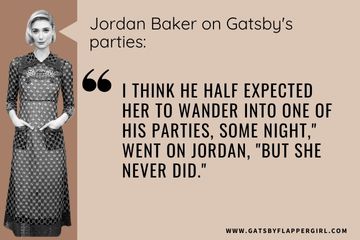 “Anyhow he gives large parties,” said Jordan, changing the subject with an urbane distaste for the concrete. “I like large parties. They are so private. At small parties, there isn’t any privacy.”

When Daisy and Tom Buchanan do show up at one of Gatsby’s parties, Nick notes:

“Tom was evidently perturbed at Daisy’s running around alone, for on the following Saturday night he came with her to Gatsby’s party. Perhaps his presence gave the evening its peculiar quality of oppressiveness—it stands out in my memory from Gatsby’s other parties that summer. There were the same people, or at least the same sort of people, the same profusion of champagne, the same many-colored, many-keyed commotion, but I felt an unpleasantness in the air, a pervading harshness that hadn’t been there before.”

Nick also describes some of Gatsby’s parties as being over the top: 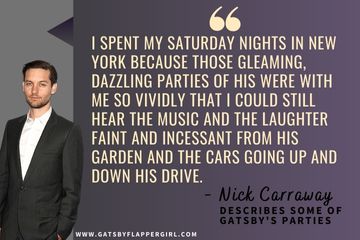 Old-money East Egg meets new-money West Egg, and no one seemed to care much since it wasn’t their money that was being spent on these parties.

Gatsby became well-known around New York for his lavish parties. No one knew that the main reason for these parties was one man’s search for his true love.

Gatsby will get the girl in the end, but it won’t end the way he had hoped, which makes this one of the most tragic love stories known to modern man. 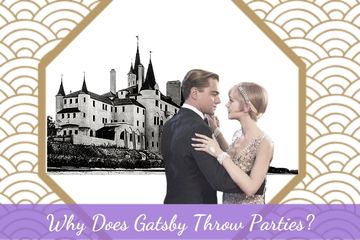 Why Does Gatsby Throw Parties All the Time?
In the novel, Jay Gatsby is well-known for throwing lavish parties every weekend for anyone who shows up. Why does Gatsby throw parties? Find out here.
Gatsby Girl
Gatsby Flapper Girl