The Great Gatsby is one of the best novels of all time and consists of only 218 pages. Set in the long days of the 1920s, Daisy Buchanan was one of the leading characters of the book, as her family plays a key role in the novel. Daisy Buchanan seeks love, fame, money, and material possessions. The wife of Tom, she was the former lover of the main character of the book, Jay Gatsby.

Who is Daisy in the Great Gatsby?

Daisy had deep feelings for Jay. Residing in East Egg on Long Island with her family, Daisy had a daughter named Pam with her husband, Tom. Her daughter was never a focal point in the book or in the film, making only brief appearances.

Daisy Buchanan never wanted to be a plain Jane and was always in search of a luxurious life and she continued to be flirtatious with Jay through the story, making her husband a bit jealous. In fact, her husband ultimately also had an affair on her.

What is Daisy’s hometown in the Great Gatsby?

The cousin of Nick, she lives in East Egg with her family – her husband and daughter. East Egg was a fictional town in the Great Gatsby, and it came to life in the film adaptation of the novel.

Nick’s cousin resided in Louisville (home of the book’s author for a period of time) before she was ultimately courted by Jay. The fact that Nick is her cousin allowed him to get invited to some of the elite parties and thus allowed Nick to be a large part of the story. Without his relationship as her cousin, Nick would have been a much more minor character.

Myrtle Wilson and the Buchanan Family

While Myrtle Wilson was not specifically a part of the family, despite not being available, she was having an affair with the spouse of Daisy Buchanan. Myrtle Wilson was also married but sought a life more glamorous than what was offered by her blue collared working class spouse.

During her affair, she was in search of, and later found, a taste for the wealthy lifestyle. She never had a chance to enjoy the wealthy life, as she dies in the Great Gatsby book and in the film, as she gets hit by a car while running away from her spouse. Wilson was considered lower class and was only exposed to wealth through her affair with Tom Buchanan.

While the book did not have that many pages, it still led to several successful movies. Wilson was played in the original movie by Shelley Winters. Since there were a few movies made about the Great Gatsby, she was also played by Karen Black and played by Isla Fisher in the newest adaptation. The movie adaptations have all been quite popular, although none have been as popular as the original novel, which has been successful in its written pages for almost 100 years.

Some of the nostalgia for both the movies and the pages of the book was in Louisville since that is where the author, F. Scott Fitzgerald was stationed in the Army in his youth. While some thought Fitzgerald could have extended the pages and made this a longer novel, it ultimately has been well-read and loved by many. 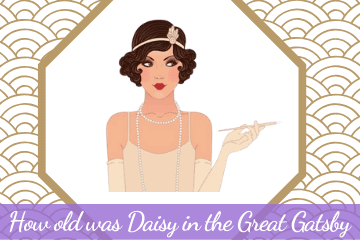 How old was Daisy in the Great Gatsby
Discover how old Daisy Buchanan actually was in the popular novel The Great Gatsby and why she sought out fame and wealth in the 1920s.
Gatsby Girl
Gatsby Flapper Girl