In the Great Gatsby, Daisy and Gatsby are in a bit of a love triangle, and Gatsby wants her to admit she does not love her husband, Tom, as much as he loves him.

Gatsby thinks he wants love, and maybe he does, but Daisy also represents the American Dream, and he wants the money and lifestyle that come with being with a woman like Daisy.

In his history, Gatsby grew up in North Dakota, and in Daisy Gatsby sees a new way of life that he would like better than the life he had before he met Dan Cody and started to plan a better future away from the poor life he was used to.

Gatsby has a lot of love for Daisy, and that is one of the central themes in the Great Gatsby. While Gatsby does care for Daisy, there are some confusing moments in the book as well.

Gatsby also projects some of his other desires in life onto Daisy. Born James Gatz, Gatsby ultimately changes his name as he chases the American Dream. Gatsby is after money, wealth, and fortune.

Some would say that Gatsby and Daisy were not two people who had a real deep love. In a deep study of the novel, the reader can ascertain that Gatsby really loved the lifestyle that Daisy could offer him, but the reader could question whether or not Tom or Gatsby loved Daisy more.

Tom certainly had a real love for Daisy, but the argument could be made that Gatsby never loved her for who she was, but instead loved to chase the lifestyle that she led.

What does Gatsby Desire of Daisy?

When wondering what does Gatsby want from Daisy, the reader should consider that what Gatsby is really chasing is more than just Daisy. Daisy was not a fan of Gatsby’s parties, and when he realizes that in chapter 6 he becomes disheartened. In Chapter 6, the reader learns that Gatsby, who originally hailed from North Dakota, just wants Daisy to admit she never loved Tom and wanted a real man like Gatsby instead.

While both Gatsby and Tom had a deep history with Daisy, only one would end up with her in the end.

How did Gatsby get his Big Break?

In the Great Gatsby, Dan Cody gave James Gatz his big break. Dan Cody was a millionaire, and he [paid good money to James Gatz (before he changed his name to Jay Gatsby) to do work for him. The work he did for Dan Cody led Gatz to become Gatsby and strive to make a lot more money.

Dan Cody also left Gatsby money when he died, but Gatsby was not able to get his hands on the money because of legal matters. However, this inspired Gatsby to make the move to New York and chase a wealthy lifestyle, putting distance between himself and his rural North Dakota upbringing.

A good study under Cody, Gatsby soon got the chance to leave the past behind and earn his own money.

Why does Gatsby Attract Daisy?

Gatsby was infatuated with Daisy’s lifestyle and become a bit obsessed with becoming a man that could be with her and enjoy a luxurious lifestyle.

In one chapter of the book, the reader sees that Gatsby did love Daisy, but he also loved the fantasy life he envisioned for himself if he was able to convince her to leave Tom and marry him.

Like Daisy, Gatsby wanted a glitzy life that Dan Cody helped him envision for himself when he let Gatsby study his way of life.

Gatsby never got the second chance with Daisy, as he died before they had the chance. As for Daisy, she was impressed by the money Gatsby eventually got, but never could quite get herself to separate permanently from Tom.

Cody and his Influence on Gatsby

Without Dan Cody, Jay Gatsby’s life would have been on an entirely different trajectory, and he most likely would have never met Daisy, Tom, or any of the other characters.

The history between Cody and Gatsby led Gatsby to take on a new name and pursue a new lifestyle. It could be argued that Dan Cody is the most important character in the entire novel.

It turned out to not matter that Gatsby could not inherit the money Cody left for him, as just by being influenced by Cody Gatsby’s entire life was changed.

Gatsby did not have much of a role model growing up, so Cody was the first person to truly influence his life, and is ultimately the reason he changed his name and became the man he became. 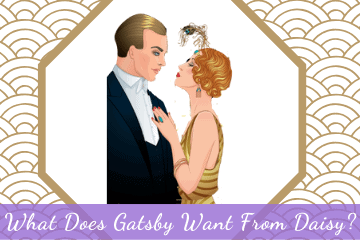 What Does Gatsby Want From Daisy?
Click here to find out what Gatsby wants from Daisy.  Did Dan Cody influenced him and his young love for Daisy, and why Gatsby wants Daisy to leave Tom for good!
Gatsby Girl
Gatsby Flapper Girl