A complicated character, Daisy Buchanan is generally not looked at in a positive light in the Great Gatsby. Considered a “Golden Girl,” in the novel by Fitzgerald, she is a wealthy woman who attracts many men including both Jay Gatsby and Tom Buchanan.

In Chapter 1, Nick Carraway, the narrator, introduces Daisy for the first time as an individual, “paralyzed by happiness.” While the reader will need to continue on past chapter 1 to get to know the real Daisy Buchanan, she at least wants people to think she is happy.

On the surface, she appears to be a bit shallow, all about fame, wealth, and money. However, she gets involved in some complicated love stories and eventually is actually responsible for the death of her husband’s lover.

What quote best describes Daisy in the Great Gatsby?

“I hope she’ll be a fool – that’s the best thing a girl can be in this world, a beautiful little fool,” is a quote that describes Daisy almost perfectly. This quote would become synonymous with Daisy’s attitude toward life as she often at times behaved just like a fool whether because of love or money and fame.

Did Daisy call Gatsby before he Died?

The Gatsby Daisy love story was a complicated one . In the novel, (written by F Scott Fitzgerald) Gatsby dies before getting a chance to talk to Daisy one last time. According to Nick, Daisy does not call Gatsby again before he dies.

Is Daisy Selfish in the Great Gatsby?

A little bit. Buchanan has it all; she is a wealthy woman who many men want to be with and many women want to be. This puts her in a position that many people desire. Coming from a wealthy family, her character has money and isn’t afraid to flaunt it. If you ask the reader, Daisy’s behaviors could be interpreted in a few different ways. But, her treatment of Tom and Jay Gatsby would lead many to believe she is selfish and only has her own interest in mind.

In the last chapter, Daisy actually leaves with Tom. This is further complicated because she actually is responsible for the death of Tom’s lover, Myrtle.

The Tangles Tom and Daisy Relationship

The love between Tom and Daisy was quite tangled. While one could recognize how they first fell for each other, Daisy maintained a love affair with Gatsby and Tom with Myrtle, making one question how much they actually loved each other in the end.

Tom’s relationship was never quite even, with Myrtle loving him more than the reverse. While many thought Gatsby killed Myrtle, it was actually Daisy. Many assume it was mostly an accident, but still, others question if maybe she did it on purpose.

Did Daisy Show Any Remose After Myrtles Death?

She certainly is selfish when it comes to Myrtle, showing almost no remorse after her death simply because Myrtle was not a member of the same elite social class Daisy was. Her disregard for Myrtle’s life as many thinking she was quite selfish even if some claim Myrtle’s death was accidental.

Did Daisy Have A Daughter in the Great Gatsby Book?

Daisy did have a daughter in the book, but she is only a small part of the novel. Perhaps if the relationship with her daughter was elaborated upon, she might have gained a better reputation.

Why is Daisy a Bad Person in the Great Gatsby?

Nick Carraway leads the reader to understand she is a complicated character who is driven by money and wealth, which makes some question her motives and see her as an unsavory individual that many people do not like. Depending on who you ask, there are many opinions about Daisy’s persona.

Are Readers Forced to Dislike Daisy in the Novel?

It’s not that the reader is forced not to like Daisy, she can be quite likable, but the fact that she essentially killed Myrtle is why many think she is a bad person. Even if she hadn’t driven that car, she could still be hard to like given her attitude towards becoming and staying, rich.

Since Myrle was not part of the social elite, Daisy essentially considered her expendable and did not show much remorse after her death, a fact that many readers hold against her and use as a reason to dislike Daisy. 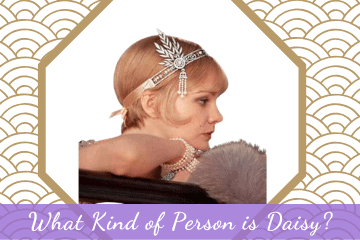 What Kind of Person is Daisy in the Great Gatsby?
Discover what Daisy is really like in the infamous novel The Great Gatsby.  Why did Daisy act like a fool?  Was it for money, love, or fame?
Gatsby Girl
Gatsby Flapper Girl